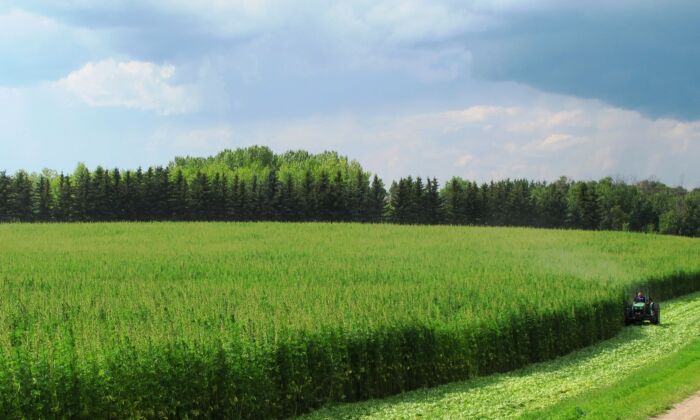 Harvesting hemp to be used for fiber. Besides being extremely versatile, hemp grows incredibly rapidly. (Courtesy of Jan Slaski)
US

The use of hemp for industrial purposes—such as grain and fiber—has been the next big thing since the passing of a farm bill legalizing production in 2018.

Since then, a parallel market has sprouted up alongside the cannabinoid industry.

Unfettered optimism was high at the beginning, which triggered a moonshot planting in 2019.

Four years later, seasoned farmers and venture capitalists alike are struggling with a saturated market and oversold expectations on both ends of the industry.

Historically, advocates have marketed hemp as a sort of miracle crop with gusto. The movement gained serious traction as an investment within the United States once Cannabidiol (CBD) garnered a reputation for having medicinal benefits, which began in California in 1996.

Some experts partly attribute this to blowback from supply wildly exceeding demand early in the game.

“There were a lot of farmers that got involved in hemp in 2019—it was over-produced that year, and a lot of farmers were left with big bills and very little in the way of returns,” Mike Leago, founder of the iHempx, told The Epoch Times.

As the CEO of an international hemp exchange, Leago has worked across the hemp supply chain since 2016.

He says many “dishonest and malicious bad actors” within the industry have thrown a wrench into the nascent market. Some of this was done through unrealistic spreadsheet forecasts, driving a gold rush of investments.

“Oversupply became a reality,” he said.

Due to continued market congestion in 2021, some Oregon growers were stuck with thousands of pounds of hemp crops bagged and stacked inside their barns. By July, many couldn’t sell their harvest at a break-even price.

In Texas, hemp enthusiasts touted the crop as a drought-resistant, economic life preserver. Though since 2019, farmers have yet to see any returns on their investments.

The president of the Texas Hemp Growers Association, Kyle Bingham, told reporters that “the interest is not there with farmers” this year. He added that growers don’t want to waste time, money, land, or anything else on hemp at the moment.

Some of this disgruntled sentiment is due to a notable underperformance amid widespread drought, which has affected 61 percent of the continental United States this year.

Water concerns are paramount in the notoriously arid Lone Star State, where farmers can’t afford to waste a single drop of water on crops that, quite literally, can’t take the heat.

And despite hemp’s street reputation as drought resistant, little research exists to support this.

“To be candid, hemp is a plant, and extreme weather conditions are hard on crops,” director of the hemp fiber division and carbon offset for Global Smart Commodity Group, Nathan Murphy, told The Epoch Times.

Murphy asserted that misplaced expectations and poor long-term strategic planning account for a sizeable portion of early failures within the hemp industry. He also agrees with Leago’s assessment that self-proclaimed experts sabotaged the emerging market.

“I’ve heard them referred to as hemp prophets, making overly optimistic promises about cashing in on the ‘green rush,’ for a fee of course, to unsuspectingly vulnerable farmers,” he said.

On top of that, Murphy says when you add an “uneducated producer base”, burdensome regulations, and completely undeveloped value chains, it creates the “perfect recipe for disaster.”

Farmers in states like Maine, Arkansas, Tennessee, and Washington are also feeling the not-so-green effects of thousands of dollars lost on hemp crops.

Deflated prices aside, oppressive regulation and high taxes are among the chief complaints from most growers.

The USDA announced on May 16 that hemp farmers who lost crops during natural disasters in 2020 and 2021 are eligible for relief payments. While it’s a breath of fresh air for struggling producers, it has done little to deter an exodus for more price stable, reliable crops.

When it comes to the wholesale cannabis supply—including popular items like CBD oil—Leago said the over-saturation from 2019 had a monumental impact on pricing and has kept it low ever since.

But he added there may be hope on the horizon for non-cannabinoid hemp.

“On the true industrial side of the plant, we’re seeing a lot of momentum, and pricing has started to increase.”

And while some insiders are saying the industry is likely to rebound after a few years of growing pains, Murphy believes putting expectations into the right context is important.

“Is hemp production going to replace 100 percent of paper or plastic production? No, it is not,” he said.

“Those are unreasonable expectations. Can industrial hemp replace ‘some’ of the production for paper, plastics, biodiesel, human food, textiles, animal feed, building materials, and other industries? Yes, it can, and in the long run, it probably will.”