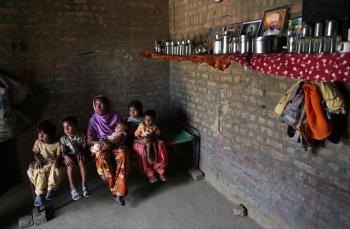 An Indian farmer sits with her children in the village of Bhatuan, 150km west of Chandigarh. Her husband committed suicide in in November 2007 due to debt. (Pedro Ugarte/AFP/Getty Images)
World

By Amritha Luthria
Print
The truth is slowly emerging. On May 18 2006, Sharad Pawar, the Indian Minister of Agriculture, presented data to the Upper House on investigations by state governments on agrarian distress.  They show that the main cause of suicide is indebtedness. In the dehumanized statistical gimmickry, the utter devastation of 100,000 households of dead farmers comprising women, children and elders was quietly buried under the soft thick carpet of the Indian Parliament.

News in mid-April reported that over 1,500 farmers in an Indian state committed suicide after being driven to debt by crop failure. The agricultural state of Chattisgarh was hit by falling water levels. "The water level has gone down below 250 feet here. It used to be at 40 feet a few years ago," Shatrughan Sahu, a villager in one of the districts, told Down To Earth magazine "Most of the farmers here are indebted and only God can save the ones who do not have a bore well."

Nearby forest depletion and poorly planned government dam projects contributed to the falling water level in Chattisgarh. Combined with the vicious money-lending schemes that are prevalent in the region, many farmers felt that death was the only option in the face of insurmountable debt.

Some of the main causes of the farmers’ mass suicide is due to absence of adequate social support infrastructure at the level of the village and district, uncertainty of agricultural enterprise in India, indebtedness of farmers, rising costs of cultivation, plummeting prices of farm commodities, lack of credit for small farmers, relative absence of irrigation facilities, repeated crop failures.

India, with adequate rainfall, warm climate, enormous biological diversity, and excellent traditional agricultural practices, has no reason to face agrarian crisis and, given nature’s bounty, its farmers have no reason to commit suicide.

Nevertheless, 1,500 did. To give a more tangible visualization of that number, that’s about four full jumbo jet planes’ worth of passengers suddenly falling from the sky. The death toll also does not hint at the countless men, women and children who are still ensnared in these dire situations, and now must grieve the loss of their family, friends and neighbours.