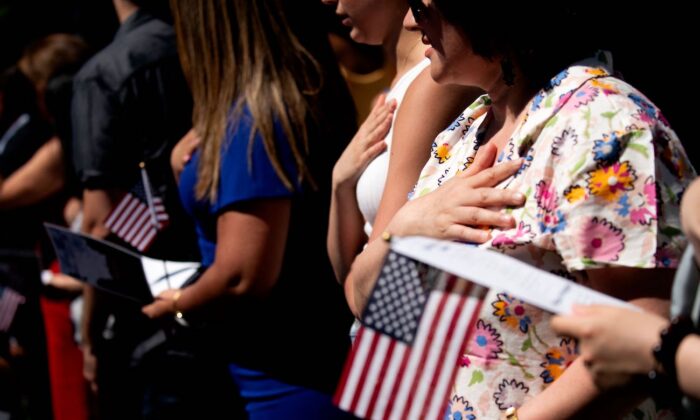 After criticism from conservative lawmakers and backlash from citizens nationwide, the Fargo Board of Education on Aug. 18 voted to reverse course on its previous week’s decision to stop reciting the Pledge of Allegiance before its meetings.

On Aug. 9, seven of the board’s nine members, including four newcomers who took office in June, voted to cancel a previous board measure that was instituted in March before the election.

Board vice president Seth Holden said at the Aug. 9 meeting that the Pledge of Allegiance was contrary to the district’s diversity, equity, and inclusion priorities.

“Given that the word ‘God’ in the text of the Pledge of Allegiance is capitalized, the text is clearly referring to the Judeo-Christian God, and therefore, it does not include any other faiths such as Islam, Buddhism, Hinduism,” Holden said, adding that this made the pledge of allegiance a “non-inclusionary act.”

Reciting the pledge is a “non-inclusionary act” and there is text within the pledge that is “simply not true,” Holden added.

Tracie Newman, who is board president, recommended that a member recite “a shared statement of purpose that would bring us all together” at the start of the meetings instead of the pledge, adding that it would be “unifying.”

“I’m just not sure that reciting the Pledge of Allegiance is a useful way to begin every one of our board meetings,” Newman said at the Aug. 9 meeting.

“These positions like by the Fargo School Board just don’t align with North Dakota values,” he said. “The logical solution is to just give parents that option to help educate their kids.”

Robin Nelson was one of two board members who voted on Aug. 9 to keep the pledge.

“It was a very easy ‘no’ vote from me from the get-go. I knew right away it would be controversial,” Nelson told Fargo’s Valley News Live.

“Our focus should be on our great students and teachers and education, but this is going to detract from that and really shed more negative publicity on the Fargo school district, and quite frankly, we don’t need that.”

Nelson’s words were proved correct. The decision prompted an outcry across the country, which led the board to hold the Aug. 18 meeting to discuss reinstating the pledge.

“That is perpetuating Critical Race Theory, which is against the law in North Dakota,” Fargo parent Jake Schmitz told Fox & Friends last week following the initial vote to ban the Pledge of Allegiance.

“The next logical step in the progression is [they’ll] want to remove it from schools because it’s a non-inclusionary act which is a bunch of [expletive].”

At the special meeting on Aug. 18, the board discussed the volume of angry emails and voicemails directed at members.

Nyamal Dei, a refugee from war-torn Sudan, was among those who received messages from irate citizens.

Dei was one of the seven members who voted on Aug. 10 to eliminate the pledge. At the special meeting, she was the only board member to vote no on reinstatement.

“We won’t be rewarding our children or students in our district for acting in this way,” Dei said at the special meeting.

“But know that this moment will pass. Let’s get back to the work that we are elected to do and that is to find a solution to our teacher shortages, mental health issues, and academic achievement for our students.”

Greg Clark, who also serves on the board, said that less than 20 percent of the “angry messages” were from Fargo residents.

He admitted that his vote to reinstate the pledge was influenced by people who do not live in the district.

“But I hope you’ll forgive me because I truly believe it is in the best interest of our schools to do so,” Clark said.

“The disruptions and the threats must end so that we can have a successful start to our school year.”

Holden voted to bring back the pledge, but not before expressing reluctance.

“Do you concede the battle to win the war?” Holden said.

“I’m also concerned about what might happen to this board in the future because we’re going to have to probably be prepared to take more heat than we normally do for decisions that we make because that there may be a perception of success.”

David Paulson, a former board member who proposed that the pledge be recited before meetings in March when he was still in office, said that the current board members were “misinterpreting” what the words mean.

The March motion passed 6-2. Holden was one of the two who voted no.

“We are misinterpreting the Pledge of Allegiance,” Paulson said at the Aug. 9 meeting.

“The pledge isn’t a show of our patriotism; it’s an affirmation of our commitment and our loyalty to the greater cause, and that greater cause is freedom.”