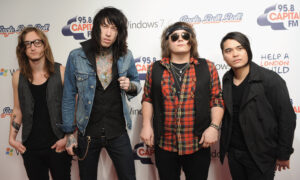 Fans of comic book superhero creator Stan Lee, who died on Nov. 12, have been paying tribute to him at his star on the Hollywood Walk of Fame.

Samantha Brink was among those paying their respects to the 95-year-old. She told Reuters: “He’s really an inspiration for anyone who wants to follow any kind of dream no matter what it is. He gave us these cool superheroes that everyone can kind of look up to no matter who you are. “To the Marvel Universe he means everything because he was the beginning of it. They’ll carry on his legacy now.”

Actors and directors took to social media with messages of condolence and tales of how he affected their lives and careers.

Kevin Feige, the head of Marvel Studios, wrote: “No one has had more of an impact on my career and everything we do at Marvel Studios than Stan Lee. Stan leaves an extraordinary legacy that will outlive us all.”

Meanwhile, Chris Evans, best known for playing Captain America, tweeted: “For decades he provided both young and old with adventure, escape, comfort, confidence, inspiration, strength, friendship and joy. He exuded love and kindness and will leave an indelible mark on so, so, so many lives. Excelsior!!”

“I’m proud to have been a small part of his legacy and …. to have helped bring one of his characters to life,” wrote Wolverine actor Hugh Jackman.

We’ve lost a creative genius. Stan Lee was a pioneering force in the superhero universe. I’m proud to have been a small part of his legacy and …. to have helped bring one of his characters to life. #StanLee #Wolverine pic.twitter.com/iOdefi7iYz

Damn… RIP Stan. Thanks for everything. pic.twitter.com/TMAaDJSOhh

His contribution to Pop Culture was revolutionary & cannot be overstated. He was everything you hoped he would be & MORE. I loved this man & will never stop missing him. They say you should never meet a childhood idol. They are wrong. #RIPStanTheMan pic.twitter.com/6OKH07ahJg

What a man. What a life.
When I first broke into Hollywood, he welcomed me with open arms and some very sage advice I’ll forever take to heart.
A true icon who impacted generations around the world.
Rest in love, my friend. #imagination #stanlee 💫 pic.twitter.com/dw3FXMgyHp

Thank you @TheRealStanLee for the escape from this world & great joy inhabiting the ones you created!! You made so many believe in the good, the heroic, the villainous, the exciting, most of all, you were giving & gracious to us all. RIP