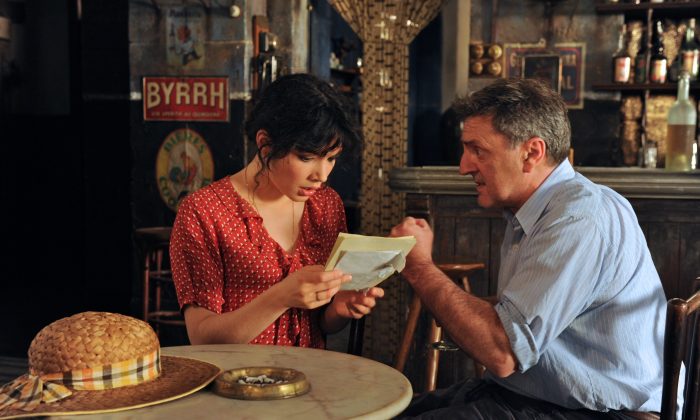 ‘Fanny’: A Lovely Remake of a 1932 Seafaring Romance

For sailors, it is an age-old question: Which is stronger, the love of a woman or the call of the sea? It is an issue that preoccupies the first two plays of Marcel Pagnol’s Marseilles trilogy.

In the opening installment, Marius has apparently answered in favor of the latter. Abandoned and secretly pregnant, the woman he once loved must now carry on in Daniel Auteuil’s adaptation of “Fanny.”

Although they long carried torches for each other, Marius decided he had to ship out when he finally had the opportunity, and Fanny believed she had to let him go. Unfortunately, her unwed pregnancy promises to ruin her standing around the Old Port of Marseilles.

Marius’s gregarious father César is still under the illusion that his son will soon return to marry Fanny, but the lack of letters from her former lover speaks volumes.

Much to her surprise, Fanny’s old suitor, Panisse the sail merchant, renews his marriage offer, even after she fully explains her condition. Initially, César bitterly resents their union, but when they fully take the tavern-keeper into their confidence, he accepts the pragmatism of the arrangement. He will be the godfather to his absent son’s baby, while Panisse’s wealth will secure his future.

Of course, the big uncertainty looming over their arrangement is Marius, should he ever return.

As both actor and director, Auteuil has an assured command of Pagnol’s work. While there are a few strikingly cinematic sequences in “Fanny,” he intimately focuses on the personal drama, eschewing flash and dazzle. He also delivers the most memorable performance, defining the sacrifices of parenthood in exquisitely sensitive terms.

“Fanny” has an evocative old-world vibe, heightened by the best score that over-rated film composer Alexandre Desplat has penned in years. Cinematographer Jean-François Robin gives it all a warm, nostalgic (in the best sense) look. A quality period literary adaptation, “Fanny” satisfactorily stands alone for viewers who have not seen the preceding “Marius.”