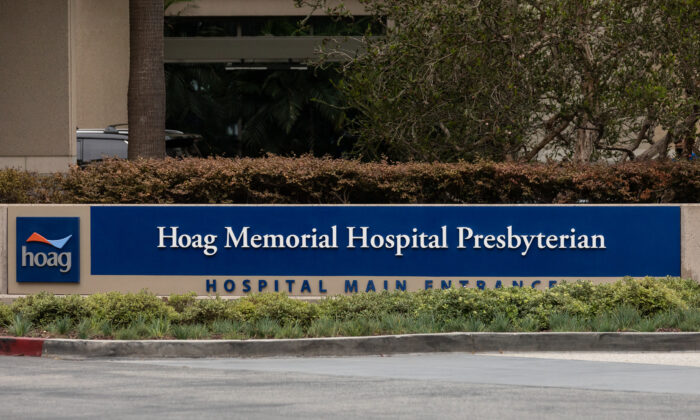 Officials announced Sept. 15 that the donation will boost the hospital’s growth, after Hoag became independent of Providence Health in January 2022 after a 10-year affiliation.

According to Robert Braithwaite, president and chief executive officer of Hoag, the hospital’s focus is on “maintaining our commitment to ensuring that no one needs to leave Orange County to receive world-class, comprehensive, compassionate care.”

“Simply put, we’re driven to achieve the highest level of medical standards and outcomes for our patients, and this gift will help us achieve that goal,” Braithwaite wrote.

The money was donated by the estate of Audrey Steele Burnand—a descendant of the Steele family that has been giving to the hospital, as well as other recipients—since the 1960s. Over the years, the family’s donations to Hoag Hospital alone now total $134 million.

“Through this remarkable gift, they once again have demonstrated their compassion for everyone who needs outstanding medical care,” said Flynn Andrizzi, president of the Hoag Hospital Foundation. “I can’t think of enough words to properly express how moved all of us at Hoag are by their generosity.”

The nonprofit health care organization specifically wants the donation to help expand its services and programs locally in Orange County.

Burnand—who died in 2020—was the daughter of Harry and Grace Steele. The Steele family’s Los Angeles-based company built the pumps that helped irrigate the San Joaquin Valley. The family’s success led to contributions that supported medical research and advancement.

The main vehicle for the family’s giving was the Harry and Grace Steele Foundation, which donated about $165 million over five decades. The earliest gift to the hospital was $8 million to advance the early study and treatment of cancer and cardiology.

The estate took over philanthropic efforts after the foundation closed its doors in 2006.

In February 2022, the estate also gifted $57.5 million to the University of California–Irvine, to fund the establishment of a new research center devoted to studying the causes of, and treatments for, depression.

Hoag Hospital did not respond to an inquiry from The Epoch Times by press time.