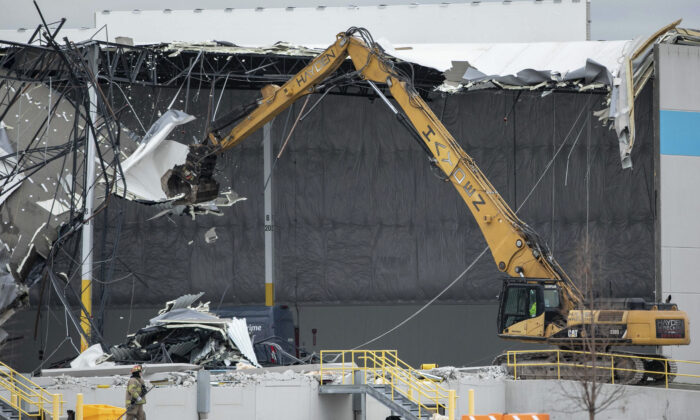 Crews use an excavator to pull down pieces of a damaged roof during search and rescue operations at the Amazon distribution center in Edwardsville, Ill., on Dec. 11, 2021. (Daniel Shular/St. Louis Post-Dispatch via AP)
US News

The family of a delivery driver who died in December when a tornado hit an Amazon warehouse in Edwardsville, Illinois, has filed a wrongful death lawsuit, their lawyers announced on Sunday.

Austin McEwen, 26, a resident of Edwardsville and an independent contractor of Amazon, was working as a driver for an Amazon Delivery Service Partner when the tornado struck, leading to the partial collapse of the building. He was one of six people killed.

The federal Occupational Safety and Health Administration (OSHA) stated on Dec. 13 that it would investigate the partial collapse of the Amazon fulfillment center three days prior.

“McEwen was one of numerous individuals required to work during an Amazon ‘peak season’ when Amazon management knew that conditions were highly unsafe as tornado warnings had been issued,” Clifford Law offices, the McEwens’ attorneys, said in a statement.

“Tornado warnings had been issued for southwestern Illinois as early as December 9, 2021, and were reissued on several occasions with growing concern and intensity over the next 24 hours,” lawyers said.

In the lawsuit, reportedly the first legal action taken in regards to the incident, McEwen’s parents, Randy and Alice McEwen, allege that Amazon administrators knew severe weather was imminent but failed to implement or execute an emergency plan or evacuate employees from the building.

The family says Amazon “carelessly required individuals … to continue working up until the moments before the tornado struck,” and “improperly directed” McEwen and his colleagues to shelter in a bathroom, a location they say Amazon knew or should have known would not protect them, the complaint reads (pdf).

“Initial reports from those that survived this avoidable tragedy are disturbing. We certainly intend to discover what precautions Amazon could have taken to save lives. Certainly, this entire facility could have been evacuated when it was believed a tornado was en route. It appears that holiday profits took precedence over safety,” said Jack J. Casciato, partner at Clifford Law.

“We need to find out if training and emergency protocols were in place for those in the building as well as those who entered the building with jobs regularly connected to Amazon outside of the facility,” Casciato said.

The lawsuit is seeking more than $50,000 from each of the four defendants named in the suit, which include Amazon, Contegra Construction company, and Tristar Properties, both of which helped to construct the building.

“Sadly, it appears that Amazon placed profits first during this holiday season instead of the safety of our son and the other five families who lost loved ones,” Alice McEwen said in a statement on Monday.

In a statement to The Associated Press, Amazon spokesperson Kelly Nantel said the company would defend itself against the lawsuit, saying it “misunderstands key facts” about the severe weather alerts and the condition and safety of the building, but added that the company is supporting families who lost loved ones in the incident.

“This was a new building less than four years old, built in compliance with all applicable building codes, and the local teams were following the weather conditions closely,” Nantel said.

“Severe weather watches are common in this part of the country and, while precautions are taken, are not cause for most businesses to close down. We believe our team did the right thing as soon as a warning was issued,” she added.

An Amazon spokesperson told The Epoch Times: “This lawsuit misunderstands key facts, such as the difference between various types of severe weather and tornado alerts, as well as the condition and safety of the building. The truth is that this was a new building less than four years old, built in compliance with all applicable building codes, and the local teams were following the weather conditions closely.

“Severe weather watches are common in this part of the country and, while precautions are taken, are not cause for most businesses to close down. We believe our team did the right thing as soon as a warning was issued, and they worked to move people to safety as quickly as possible.

“We will defend against this lawsuit, but our focus continues to be on supporting our employees and partners, the families who lost loved ones, the surrounding community, and all those affected by the tornadoes.”