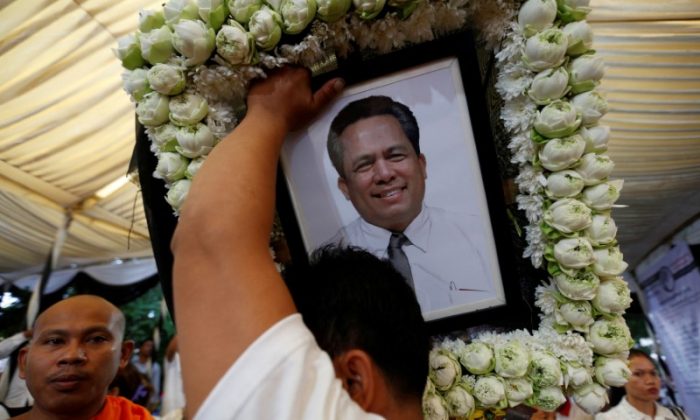 A man holds portrait of Kem Ley, an anti-government figure and the head of a grassroots advocacy group, "Khmer for Khmer", shot dead on July 10, as they attend a funeral procession in Phnom Penh July 24, 2016. (Reuters/Samrang Pring/File Photo)
Australia

Kem’s Ley wife Bou Rachana and her five children arrived in the southern Australian city of Melbourne on Saturday, the office of Victorian state MP Hong Lim said in an email to Reuters on Tuesday.

“They were granted a Special Humanitarian Visa on 14 February 2018 … We are very happy to finally have them here,” the statement said.

Kem Ley, 46, was gunned down in broad daylight at a shop in the capital Phnom Penh on July 10, 2016. Bou Rachana, who was seven months pregnant at the time, and her four sons fled Cambodia in August 2016, fearing for their safety.

Kem Ley’s death drew tens of thousands of protesters onto the streets against a backdrop of growing political tension with veteran Prime Minister Hun Sen.

A Cambodian court jailed a man for life last year for killing Kem Ley. The murder case raised public suspicions of a political motive, but the convicted killer testified that he killed Kem Ley was over a debt.

Human rights groups and Kem Ley’s supporters remain sceptical of the motive. The family said the activist did not owe any money.

Prime Minister Hun Sen has come under criticism from Western countries and rights groups for a crackdown on government opposition ahead of elections in July, at which he is expected to extend his 33-year rule.

A Cambodian court dissolved the opposition Cambodia National Rescue Party (CNRP) last year, following the arrest of its leader Kem Sokha on treason charges, which he says were politically motivated.

Exiled Cambodian opposition figure Sam Rainsy has raised the prospect of violence if the election is not postponed.