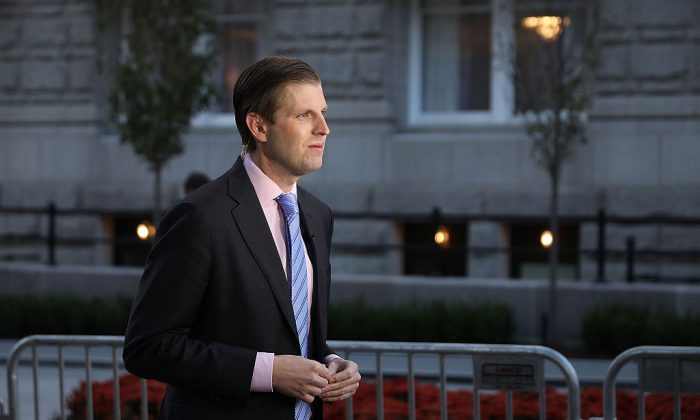 Eric Trump, son of Donald Trump, does a television interview before the ribbon cutting ceremony during the grand opening of the new Trump International Hotel in Washington on Oct. 26, 2016. (Chip Somodevilla/Getty Images)
US News

The family of a boy battling with cancer became sudden victims to a torrent of abuse after they thanked Eric Trump, the son of the president, for his donations to their hospital.

Eric Trump helped raise $16.3 million for the St. Jude Children’s Research Hospital of Tennessee over the past 10 years or so, according to a letter from a hospital official.

The boy, Zach, was diagnosed with cancer at a young age and is now recovering after receiving life-saving treatment at St. Jude’s. His aunt, Sherrie Hopper, eventually found out about Trump’s donation and decided to thank him on Twitter.

“Thank you for your commitment to St. Jude. This St. Jude family is eternally grateful,” Hooper said in a tweet directed to Trump. He responded by praising St. Jude and called his work there “one of the most important and meaningful missions of my life.”

@EricTrump Thank you for your commitment to St. Jude. This St. Jude family is eternally grateful.

.@StJude is the best cause in the world! It has truly been one of the most important and meaningful missions of my life. https://t.co/9I4Qf4uNOF

But things quickly turned sour after their public exchange.

Hopper said she was immediately hit with countless hate-fueled messages. Both Trump and the hospital were also inundated with “nasty” tweets. The hatred eventually pushed her to make a #WalkAway video—a grassroots movement where people talk about why they left the Democratic party. In a July 7 tweet, she thanked the people from the movement and said they even tracked down Zach’s personal fundraiser for St. Jude and donated.

Footage shows Hopper, at times on the brink of tears, describing how she got pummelled with harassment for nearly two weeks after her initial tweet, adding that “sadly, nothing is off limits for some.” She also showed Zach in the video to “prove he was real” after many accused her of being a Russian bot spreading lies.

“The hate that has come out is unreal.”

“They have no boundaries, no conscience, they will just hide behind the keyboard and it’s just ok to be nasty and hateful to people,” she said.

I have news for you all. I am not a Russian bot. I just happen to be grateful to people that help my family and that includes @EricTrump Get a grip sometimes people have a different way to see the world.

In a July 8 tweet, she wrote that the hospital should have been left out of the harassment: “St. Jude should be Sacred. Why can’t people just be kind to one another?”