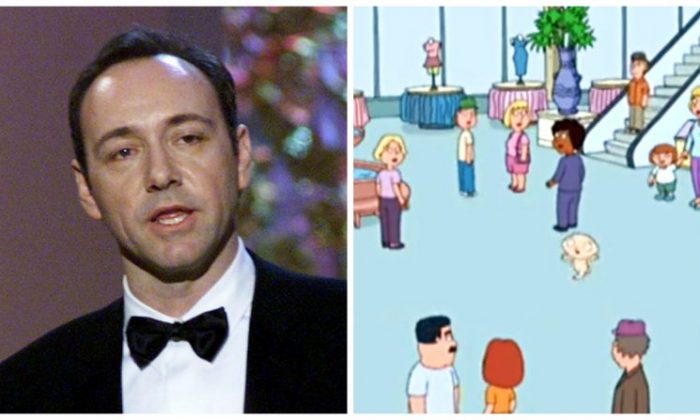 Family Guy Made Fun of Kevin Spacey 12 Years Ago

The creator of the animated comedy hit television series Family Guy made a joke about actor Kevin Spacey 12 years before Spacey was accused of sexually assaulting a 14-year-old boy.

In an episode of Family Guy, baby Stewie runs through a crowded mall wearing only a diaper and yells for help.

The brief joke from the decade-old episode was dug up by a Twitter user hours after Buzzfeed News published an article in which actor Anthony Rapp accused Spacey of sexually assaulting him as a teenager.

This is not the first time in recent weeks that the name Seth MacFarlane, the creator of Family Guy, appeared in the discussion about the sexual abuse epidemic on Hollywood.

In early October, when news broke about decades of sexual abuse by Hollywood mogul Harvey Weinstein, social media users recalled MacFarlane’s 2013 Oscar speech, where he made a pointed stab at Weinstein.

After announcing the nominees for Best Supporting Actress, MacFarlane said: “Congratulations, you five ladies no longer have to pretend to be attracted to Harvey Weinstein.”

His quip drew immediate laughter from the celebrity crowd.

MacFarlane has not yet commented on the Family Guy clip, but he did issue a statement about the 2013 Oscars joke, saying that he took a jab at Weinstein after his friend and actress Jessica Barth confided in him in 2011 about an encounter with Weinstein and “his attempted advances.”

“It was with this account in mind that, when I hosted the Oscars in 2013, I couldn’t resist the opportunity to take a hard swing in his direction,” MacFarlane wrote on Twitter on Oct. 11. “Make no mistake, this came from a place of loathing and anger. There is nothing more abhorrent and indefensible than abuse of power such as this.”

MacFarlane is not the only comic to have poked fun at alleged sexual abusers in Hollywood. Tina Fey’s show, 30 Rock, included a blunt joke about Weinstein’s predatory behavior.

Comedian Hannibal Buress joked that Bill Cosby has many rape allegations about him during a stand-up routine that went viral in 2014. Shortly after, media started covering the allegation’s against Cosby, Yahoo News reported.

The comedic references about sexual assault are especially poignant, since part of the discussion in recent week has centered around who knew about the misdeeds as they happened.