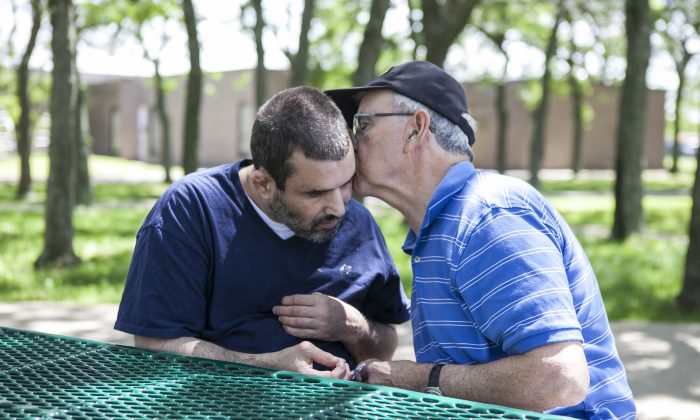 Anthony Cosentino and his son, John Cosentino, at the Brooklyn Developmental Center, June 20, 2014. The center is one of the two developmental centers in NYC that are slated to close under Governor Cuomo's initiative to transition adults with developmental disorders from institutions to group homes. Some fear group homes cannot adequately care for those who have severe disorders. (Samira Bouaou/Epoch Times)
New York

Will the severely developmentally disabled be safe in new group homes?
By Amelia Pang

NEW YORK—With the Brooklyn Developmental Center (BDC) closing on Dec. 31, John Cosentino, a 51-year-old man with a history of seizures, self-injuries, and a tendency to swallow inedible objects, will move out of the center and into a home that offers more independence. His parents are terrified about the transition.

Driven by a 1999 Supreme Court decision that favored integrated settings for people with mental disabilities, psychiatric hospitals and developmental centers have been closing nationwide in order to transition patients into more humane, community-based homes that encourage independence. For most patients, it is a welcome change.

But independence can be dangerous for John Cosentino, one of the many adults living in locked down residential units at BDC who suffer from severe disorders. He has a combination of behavioral disorders such as aggression, autism, and pica, a disorder that causes him to eat inedible items. To ensure his safety, he needs a structured life and 24-hour, one-to-one direct care by highly trained professionals.

For the most part, he had received that at BDC.

Although the center is closing at the end of the month, a few critical questions about the quality of his new group home care remain unanswered.

Over the years, the elder Cosentino and his wife contacted numerous group homes from Maine to Florida, but none had the capacity to keep their son safe.

Without the proper care, John Cosentino has endangered his life several times.

He has eaten screws, cigarette butts, and padding from chairs. At age 9, he once smacked himself over 600 times in one sitting.

It wasn’t until age 14, in 1978, that John Cosentino was finally accepted into the newly opened BDC, which his parents called a miracle. The institution had centralized services and staff that could efficiently keep John Cosentino safe. BDC was his last resort.

His current transition from BDC into an Individualized Residential Alternative (IRA) is worrisome to his parents because there are some unanswered questions.

An IRA is a type of community residence that provides room, board, and 24-hour care. It also offers employment for those who have the ability to handle it. But there are no nurses or full-time staff, said the elder Cosentino.

He is concerned because his son’s diagnoses require that he has a highly structured environment with very little changes to his schedule. It is difficult for him to deal with changes in staff.

For the time being, his usual caretakers are going with him during the transitional period. But it is unclear how long they will remain with him. “It’s impermanent,” the elder Cosentino said.

Considering his son’s violent history, the elder Cosentino is also unsure if the group home staff are prepared for emergency scenarios. Some of the intervention staff are currently located offsite.

For Some, a Surprising Happy Ending

For many years, Renee Fulton was deeply concerned about her son’s transition from BDC into a group home. Fulton’s son has an intellectual disability that requires 24-hour supervision.

“You know what you have at BDC, but you don’t know what you’re going to get,” she said. “That’s why I didn’t want BDC to close.”

In early 2015, her son moved into a two-bedroom apartment because BDC was closing. To her surprise, her son has continued to do well after leaving BDC.

The workers at the group home were qualified, cooperative, and tailored to his individual needs.

Fulton said her son has been receiving more one-on-one care at the group home, which is good for his condition.