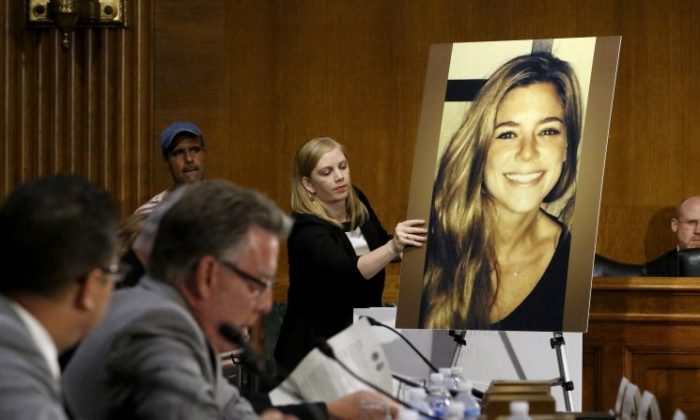 A photo of murder victim Kate Steinle is placed on an easel as her father Jim Steinle (2nd L) prepares to testify about her murder during a hearing of the Senate Judiciary Committee on U.S. immigration enforcement policies, on Capitol Hill in Washington, DC, U.S. on July 21, 2015. (REUTERS/Jonathan Ernst/File Photo)
US News

Parents of victims killed by illegal aliens reacted with outrage when illegal alien, Jose Garcia Zarate, was found not guilty of the murder of 32-year-old Kate Steinle.

Zarate was charged with murder in connection with the July 1, 2015, killing of Steinle on a San Francisco pier. The prosecution and defense agreed that Zarate fired the bullet that killed Steinle.

The defense argued that the gun discharged accidentally, while prosecutors said that the murder was intentional. The jury ultimately decided that it was an accident.

Garcia Zarate, 45, was deported to Mexico five times since first entering the United States as a juvenile. He was ultimately found guilty of the lesser charge of being a felon in possession of a firearm, said Max Szabo, a spokesman for the San Francisco District Attorney’s Office.

Sabine Durden, the mother of Dominic Durden, a 911 operator slain by an illegal alien, took to Twitter to express her shock about the verdict.

“I can’t even think straight because of this insult to all Americans and legal immigrants,” Durden wrote.

devastated &can’t believe NO GUILTY verdict. My heart cries w the Steinle family &all of us who know their pain.Illegals get away w murder

Durden’s son was struck and killed by a twice-convicted drunk driver on July 12, 2012. The man was also in the country illegally.

Mary Ann Mendoza, the mother of police officer Brandon Mendoza, who was killed by an illegal alien, wrote:

“A HUGE slap to all the faces of Americans killed by ILLEGAL CRIMINALS today. Where in the hell is the justice system headed?!? Protection for illegals and nothing for AMERICANS!!! We need to unite and fight this BS”

The attacks & hate directed at families & victims of ILLEGAL ALIEN CRIME tonight is sickening. My prayer and our fight is to prevent this tragedy from happening to one other American family. BUILD THE WALL @realDonaldTrump

This is what happens when illegal criminals are allowed to roam our country with no consequences. Secure our Borders, uphold our laws and get dim wit politicians out of office. AMERICANS FIRST?????? @realDonaldTrump pic.twitter.com/xasXjFRPFj

Mendoza’s son was killed on May 12, 2014, by an illegal alien who had three times the legal alcohol limit in his system and was high on methamphetamine.

Jamiel Shaw Sr., the father of slain high school student Jamiel Shaw Jr., reiterated the call to “build the wall,” referring to President Donald Trump’s plan to build a wall on the southern border of the United States to stem the flow of illegal aliens into the country.

“Another case of an illegal alien getting away with murder,” Shaw Sr. wrote.

Like I said before We give them the American Dream, They give give us the American Nightmare #DeportIllegals the first time and we won't have these problems.#JamielShaw #KateSteinle #BuildTheDamnWall #ScrewDACA

These same idiotic policies got my son killed by a # time felon with an ICE detainer that the LA Sheriff's Department blatantly ignored #JamielShaw #DeportThemAll https://t.co/5lFzuZ78X2

Steve Ronnebeck, the father of Grant Ronnebeck, wrote on Facebook that the not-guilty verdict is a dangerous precedent.

Ronnebeck’s 21-year-old son was shot in the face and killed by an illegal alien in 2015.