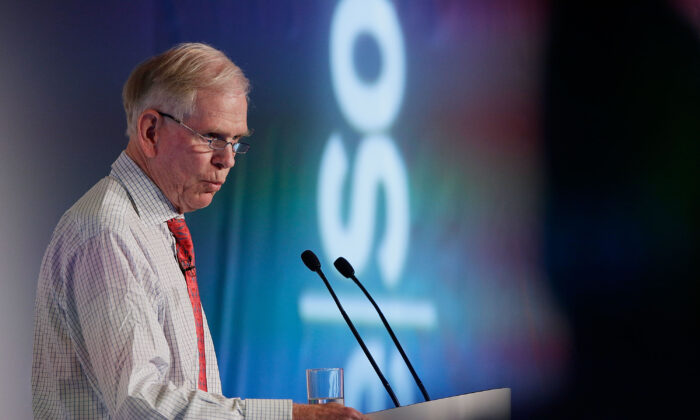 Veteran investor co-founder of Boston asset manager GMO, Jeremy Grantham, predicted that the S&P 500 could plummet by another 26 percent by 2023, while speaking at the Reuters Global Markets Forum on Sept. 8.

His comments following months of turbulence on Wall Street this year amid a series of challenges and signs that the United States is already in a silent recession.

He said at the Reuters forum that the S&P benchmark index could drop 1,000 points to around 3,000 points over the next 12 months, after declining about 15 percent this year.

A fall of that size would represent a 38 percent decline in the value of the S&P 500 from its peak in December 2021.

Grantham warned investors on Jan. 21, that there would soon be a pop in a financial “super-bubble” of highly overvalued assets, which he said had already peaked last year.

The NASDAQ had at one time plunged 25 percent from its November 2021 peak before making a recovery in June.

Grantham predicted at the previous January 2022 meeting, that benchmark stocks would plunge by almost 50 percent.

He said the hype in stocks from mid-June to mid-August fits the historical pattern of a last minute bear market rally.

“You had a typical bear market rally the other day and people were saying, ‘Oh, it’s a new bull market,'” Grantham told Bloomberg, quipping, “that is nonsense.”

A rally often occurs after an initial hit to the markets, right before the economy slides into a major downturn.

Warning Signs Of An Economic Apocalypse

In a research note published on Aug. 31, in which he commented on the key signs of an eventual economic bust, Grantham reiterated his earlier prediction that U.S. markets would face a devastating crash.

“All three major asset classes—housing, stocks, and bonds—were critically historically overvalued at the end of last year. Now, we are seeing an inflation surge and rate shock as [was seen] in the early 1970s as well.”

He noted that those three assets classes were too overvalued last year, and combined with skyrocketing inflation and a rise in interest rates, will soon become toxic once the market crashes.

“And to make matters worse, we have a commodity and energy surge (as painfully seen in 1972 and in 2007) and these commodity shocks have always cast a long growth-suppressing shadow,” Grantham said.

He said that ongoing pandemic-related lockdowns in China, the war in Ukraine, and food and energy shortages have caused massive shocks to the market.

The co-founder of GMO said that the outlook is worse than it stood back in January due to the multiplication of economic crises.

He also predicted that in the long term, there will be a “broad and permanent food and resource shortage,” which will be “made worse by accelerating climate damage,” along with the impact of shrinking workforces due to low global birth rates.

“These few epic events seem to act according to their very own rules, in their own play, which has apparently just paused between the third and final act. If history repeats, the play will once again be a Tragedy. We must hope this time for a minor one,” declared Grantham.

“Each cycle is different and unique—but every historical parallel suggests that the worst is yet to come,” he concluded in his report.

Grantham also told the audience that he was betting against tech stocks in the NASDAQ index and high yield junk bonds, through his $1.5 billion charitable foundation, something which he had already told The Sunday Times last week.

The investor said that he expects to profit from a massive fallout and crash as tech stocks and junk bonds spiral downward, and corporate defaults begin to accumulate.

The global economic situation looks more precarious than the 2007 housing bubble prior to the late 2000s Great Recession, he said.

“This is a more dangerous looking moment in global economics than even the madness of the housing bubble of 2007,” Grantham said.

“The deterioration in fundamentals on a global basis looks absolutely shocking.”

The famed investor said told forum participants to prepare for a collapse in growth stocks, chaos in global housing markets, and rising mortgage rates which will hit homeowners.

He said that the worse inflation in over 40-years and a lack of sufficient action by the Federal Reserve has eroded investors’ real returns over the past year, making “a marginal bear market a fairly serious bear market.”

“People forget to adjust the S&P for inflation … your assets are worth 9% because of inflation in the last year,” he said.

He noted that high inflation was the prime factor for the market declines in the first half of the year, but tumbling corporate profit margins will cause the next round of losses in the second half.

“The index usually is the last thing to fall,” said Mike Wilson, chief U.S. equity strategist at Morgan Stanley, who agreed with Grantham, telling Bloomberg that the market has yet to hit bottom.

“What I don’t know is: Does that get out of hand like it did in the ‘30s, is it pretty well contained as it was in 2000 or is it somewhere in the middle?” Grantham pondered.