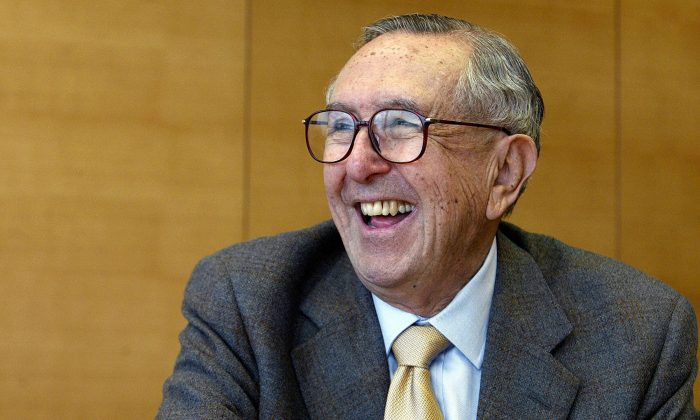 Argentinian architect Cesar Pelli smiles during an interview with AFP in Hong Kong, on March 17, 2005. (Philippe Lopez/AFP/Getty Images)
US News

NEW HAVEN, Conn.—Famed Argentine-American architect Cesar Pelli, known for designing some of the world’s tallest and most iconic buildings, has died. He was 92.

Anibal Bellomio, a senior associate architect at Pelli’s Connecticut studio, confirmed July 20 that Pelli died peacefully on Friday at his home in New Haven. Pelli was the former dean of the Yale University School of Architecture and a lecturer at the school, where he received an honorary Doctor of Arts degree.

Pelli, who grew up in Argentina and studied architecture at the University of Tucumán in the country’s far northwest, established himself as a visionary and educator, making a name for himself in the United States where his main studio was based.

The Petronas Towers in Kuala Lumpur, Malaysia is one of the Pelli’s best-known works. The twin 1,483-foot-tall skyscrapers are among the world’s tallest buildings. He is also known for designing the Salesforce Tower in San Francisco and Brookfield Place, formerly the World Financial Center, a downtown Manhattan skyscraper complex.

“With much regret we receive the sad news of the death of the great Architect César Pelli,” the region’s governor, Juan Manzur, said in a post on Twitter. “I want to convey my condolences to his whole family, his friends and his team.”

“He was without doubt a creator and his legacy will endure forever in each of his works.”

In 1977, Pelli became dean of Yale University’s School of Architecture and founded Cesar Pelli & Associates, according to a biography on the website of the New Haven, Connecticut-based studio, since renamed Pelli Clarke Pelli, which lists offices in New York, Abu Dhabi, San Francisco, Tokyo, and Shanghai.

Along with the Petronas Towers, at the time the tallest buildings in the world, Pelli’s famous works include the World Financial Center in New York, Canary Wharf Tower in London and renovation work on New York’s Museum of Modern Art.

Argentine energy giant YPF, whose headquarters in Buenos Aires was designed by Pelli, said he had “left his mark with his magnificent works in Argentina and the world.

“A true ambassador of Argentine talent. Until always maestro.”