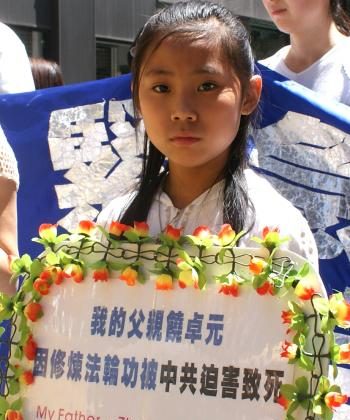 NEW YORK—Row after row of people dressed in white carried photographs of men and women through New York in a parade that was at times joyful and at other times deeply sad.

White is the traditional color of mourning in China, and the photographs gave faces to some of the more than 3,000 Falun Gong practitioners confirmed killed by China's authoritarian regime.

The parade included two marching bands and displays of traditional Chinese culture like waist drums and dragon dancing, but it was hundreds of solemn-faced men and women with memorials to the deceased that most stirred many of the observers.

The number of dead stunned Kenneth Alberty, a New Yorker who watched from the sidewalk as the mourners walked by.

He said the procession reminded him of the days of Martin Luther King and struggles in America's civil rights movement.

“This is history being made.”

For some of picture bearers, the faces they carried were more than a memory and tribute to those that died for their beliefs, they were friends and family taken in a persecution campaign that had touched them personally.

Like 11-year-old Rao Deru who carried a memorial to her dead father. That man, 34-year-old Rao Zhuoyuan, was kidnapped by Chinese police in December 2000 and died in detention two years later. At one point, the torture he suffered had reduced him to 78lbs.

A teary-eyed Joanna Qiao carried a photo of Wang Kefei, who was 34 at the time of her death.

“When I hold this picture of the practitioner who was persecuted to death I feel they are here with us,” she said.

Ms. Qiao was also persecuted while she lived in China for her practice of Falun Gong.

“Carrying this photo is very meaningful for me, I am honored.”

“It's heart breaking,” said Shanetta Dorsey, 20, as she watched the procession go by. “This is ridiculous.”

Ms. Dorsey is in New York from Ohio for an internship. Her friend Shameka Jennings, 18, from Maryland, said she was shocked more people didn't know about the crackdown in China.

“It's just outrageous to see,” she said. “Knowing about it is not enough, I want to do something about it.”

She said the United States government should do more to pressure China to improve its human rights, despite economic concerns.

More than 4,000 Falun Gong practitioners participated in the parade in Manhattan to both celebrate their practice and to mourn those killed in the Chinese regime's persecution. Among the sections in the 20-block-long parade was one devoted to encouraging Chinese people to break their ties with Chinese Communist Party, China's sole political party and defacto government.

{xtypo_sticky}Falun Gong practitioners who suffered all kinds of tortures and escaped from the jaw of death have recorded more than 100 cruel torture methods. The following are only several examples, taken from the Falun Dafa Info Center.{/xtypo_sticky}

There are over 100 methods the Chinese regime uses to torture Falun Gong practitioners into giving up their belief in the practice, according to the Falun Dafa Information Center.

Cruel beating is the most commonly used torture, says the organization's website.

Electric shocks are also commonly used in the forced labor camps where Falun Gong practitioners are taken for "punishment" and "conversion." Police often shock practitioner's mouths and genitals with the electric batons they use in the camps.