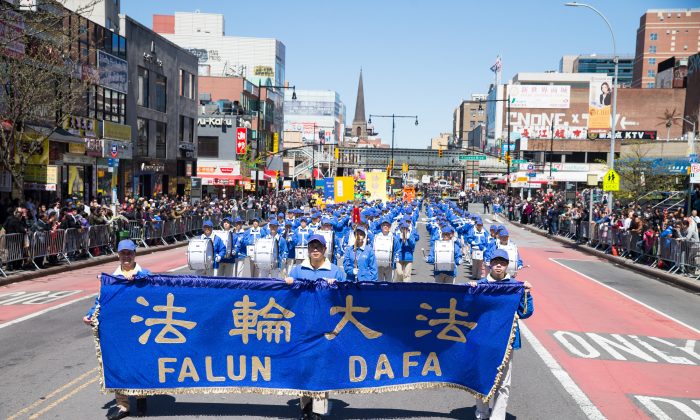 Pedestrians on the busy sidewalks paused and peered at the banners. “Falun Dafa is good,” one read. “Bring Jiang Zemin to justice,” another read. Passersby whipped out smartphones to snap videos and photos of the passing military band, colorful floats, and cheery ladies beating on Chinese waist drums.

The parade was held by about 1,000 New York-based practitioners of Falun Gong, also known as Falun Dafa, a traditional Chinese spiritual discipline that is currently suppressed by the Chinese regime. The parade marked the anniversary of a peaceful appeal by practitioners in China nearly 18 years ago.

On April 25, 1999, 10,000 Falun Gong practitioners gathered in Beijing to petition the Chinese authorities to restore the safe and legal environment they had enjoyed for the previous seven years.

Jiang Zemin, then leader of the Chinese Communist Party, chose to interpret the peaceful appeal as a challenge to the Chinese regime. Three months later, he launched a persecution campaign against Falun Gong, which remains arguably the most severe human rights issue in China today.

But “Falun Gong was never anything bad toward China,” said parade participant Sterling Campbell. “It was always about rising to spiritual enlightenment, which is the basis of Chinese culture.”

Campbell, formerly a drummer for the late David Bowie, first found physical well-being after he started practicing in 1998. He overcame alcohol and substance abuse, and has never relapsed in his 19 years as a practitioner.

Later Campbell, like many other practitioners, found the teachings of Falun Gong to be the main draw. These include finding a balance in life, looking inward instead of externally when faced with difficulties, and evaluating one’s actions with the principles of truthfulness, compassion, and tolerance.

Liu Hong, a native of Datong, Shanxi Province, also found health improvement and spiritual elevation through Falun Gong, which he picked up in 1996. When the persecution started on July 20, 1999, Liu felt that he needed to explain to the Chinese central authorities what Falun Gong is and how it had benefited him and others. He headed to Beijing with his mother and 5-year-old daughter in tow.

Chinese security officials caught up with Liu before he could make his appeal. In several stints in detention, including six months in a labor camp in 2006, Liu endured torture and abuse.  In 2014, he escaped China with his family.

Despite knowing that they face the likelihood of severe torture and could even lose their life just for being caught by the Chinese police doing the exercises in the open or handing out leaflets about Falun Gong and the persecution, Falun Gong practitioners like Liu continue to peacefully explain their faith to friends, family, work bosses, and even Chinese officials and policemen.

“April 25 is a milestone in human history,” said Ge Yunling, who heads one of two waist drum bands in the Flushing parade. “Falun Dafa practitioners wanted to clarify the situation with Chinese leaders,” but the Chinese Communist Party ended up accusing practitioners of “besieging Zhongnanhai.”

Ge, who escaped to the United States about half a year ago, noted that “many people have been blinded by the Party’s propaganda. “So we hold this event in order for people to know the truth and come to the correct conclusion.”

Carlos Suarez, a medical administrator, was attracted to watch the parade by the military band’s music. Suarez said that he didn’t agree with the Chinese regime’s persecution, and believes that “everyone has the right to express themselves as long as they don’t hurt other people.”

“And when the government or other parties go against them, this violates human rights principles,” he added.

Speaking at a rally held at the end of the parade, Falun Gong spokesman Erping Zhang said: “Everyone has seen over the past 18 years how Falun Gong used nonviolence to resist violence, spoke the truth and facts to lies, and truly demonstrated the spirit of truthfulness, compassion, and tolerance.”

“And all practitioners want is to peacefully improve themselves with a traditional Chinese practice.”

Irene Luo contributed to this report.