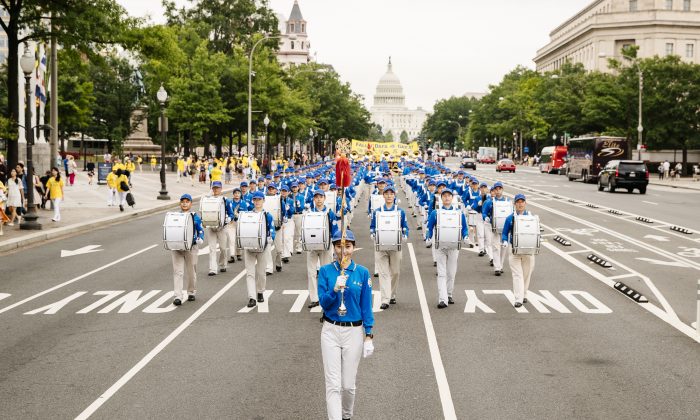 WASHINGTON—Cansin Goldring traveled 10,000 miles to join a march in Washington on June 20. It’s an annual pilgrimage for her and one she is happy to spend vacation time on by flying over from Melbourne, Australia.

Goldring, a native of Turkey, started learning the spiritual practice of Falun Dafa (also known as Falun Gong) in 2001 after moving Down Under.

“Meditation was unknown to me, but I kind of knew there was something more to life,” she said. “I saw Falun Dafa as something very genuine and very honest.”

Goldring’s inoperable heart condition, which she had been diagnosed with when she was 17, disappeared less than three weeks after she read the main text of the practice, “Zhuan Falun.”

“Every night, I was always up and walking around because of my heart palpitations,” she said. “But after reading the book, I slept through the night one night—I woke up and thought I had died because it was so abnormal.”

Ever since Goldring took up the practice, she has also worked to spread awareness of its persecution in China.

The Chinese Communist Party was initially supportive of Falun Dafa, but it grew so popular that, in 1999, then-Party leader Jiang Zemin felt threatened and vowed to eradicate it. He launched a nationwide campaign to round up practitioners en masse and built brainwashing centers and labor camps to try to force them to renounce their beliefs.

“That I can do something so freely, yet those in China can’t, makes it so important for me to do these activities,” Goldring said. “No one should have the right to stop anyone to believe what they want to believe.”

The march, which organizers said had up to 5,000 people, started at Capitol Hill and wound along Pennsylvania Avenue, past the White House, to finish at the Washington Monument.

This year, the march has taken on a special meaning, said Frank Lee, spokesman for the event organizer, Falun Dafa Association of Washington, D.C.

Aside from being a platform to showcase Falun Dafa and call out the Chinese regime, this year the march is calling out communism itself.

“We’d like to point out that communism really wants to destroy the human race,” Lee said. “In what sense? Well, they want people to not believe in god, they want to drag down moral values, they want to people to give up traditional values and morals and how to be a decent human, basically.”

Lee’s words are corroborated by a statement in the “The Communist Manifesto” by Karl Marx and Friedrich Engels, which reads, “Communism abolishes eternal truths, it abolishes all religion, and all morality.”

Lee and other Falun Dafa practitioners who hail from China are well versed on how communist ideology can destroy a culture.

Now, he says, it has permeated the whole world, but in a more invisible, insidious way than the violent revolution used in China.

“If you look at the Western world, the free world, including the United States, people are believing less and less, becoming atheist, and they are abandoning their traditional values,” Lee said. “It’s more invisible and that’s the scary thing, because it’s implanting in people’s minds, and people are being conditioned.”

“It’s really a way of controlling people from thinking and speaking freely and independently—a set of guidelines of what to say and what not to say,” he said.

“High tax, high welfare, et cetera, sometimes sound good, but these policies actually don’t encourage people to study hard and work hard to make a better life for themselves,” Cheng said. “Communism makes people think everyone is equal, but the result is that people in communist countries eventually lose everything.”

Walter Reissmann, a psychotherapist from Germany, said he believes the core of communism is to destroy religion.

“Communism is destroying religion and spirituality,” he said. “It’s intolerant, it wants to be the only religion on the world, in my understanding, and that’s a real big problem.”

Lee said the antidote to communism is to return to morality and tradition.

“Morality and tradition, in many ways, teach people how to be human, and therefore we can understand the teachings from the divine,” he said.

“If you destroy all that, morality will decline, and with it, a person’s soul. If you destroy someone’s soul, then you destroy that person forever. So in that sense, it’s important to have traditional values and morality because that’s how the human race has hope.”

Joel Chipkar, who traveled from Toronto to join the march, started practicing Falun Dafa 20 years ago, before the Chinese regime started persecuting it.

He agreed with Lee, saying morality is “everything.”

“Morality is the foundation of human beings. If we don’t have morality, then we’re just animals,” Chipkar said.

Lee said the strong anti-communist messages in the parade don’t mean Falun Dafa has turned into a political movement.

“No, absolutely not. Our purpose is always to stop the persecution,” he said. “But in the process of exposing the communist regime, obviously it involves the regime’s persecution policies. But the practice, Falun Dafa, it’s not about politics at all.”

He said he hopes the march helped people learn about the atrocities happening in China as well as the evils of communism in general.

“If you’re not able to do anything to directly help stop the persecution, at least you can tell the people around you about this terrible, horrible persecution that’s happening in China,” he said.

With reporting by Paula Liu, May Ning, and Nan Su.