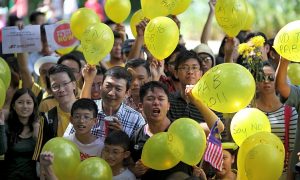 As a European Parliament vice president and longest-serving member of its Foreign Affairs Committee, I have for three years campaigned to draw attention to the brutal and systematic persecution by the Chinese regime of practitioners of Falun Gong, a Buddha-school spiritual movement with, at one time, 70 to 100 million adherents.

They have been persecuted—simply because Falun Gong is popular—by the most paranoid, brutal, and arbitrary regime in world history, which has killed 70 million of its own people, 38 million through deliberate starvation.

I write to urge you to initiate an inquiry into the systematic process of imprisonment without trial, escalating torture, and the murder of thousands of innocent people under torture. This goes beyond man’s inhumanity to man: It amounts to genocide under Article 2 of the Genocide Convention. The age of impunity is over, and those who know what is taking place in China look to you to take action.

As U.S. Supreme Court Judge Felix Frankfurter said when told in 1942 by the Pole Jan Karski of what was happening in the Nazi death camps, “I did not say this young man is lying. I said I am unable to believe him. There is a difference."

Secretary-General, there is plenty of evidence of genocide in China if only you would care to look or to listen to the U.N. rapporteurs on torture and religious freedom.

Falun Gong is a spiritual and meditation movement that echoes traditional Chinese beliefs that humans are connected to the universe through mind and body. The Chinese Communist Party describes it as a “cult,” whereas international jurisprudence suggests that a “cult” should include financial commitment, alienation from family, disciplined organization, brainwashing, anti-social behavior and the like, none of which apply to Falun Gong. Like all qigong (spiritual exercise) groups, Falun Gong has a “master” whose exercise book, published in 1992, remains the only financial commitment for most.

My campaign began in May 2006, when I visited China on a fact-finding mission in preparation for a report on human rights and democracy for the European Parliament's Foreign Affairs Committee. In Beijing, at great personal risk to them, I interviewed two former prisoners, Falun Gong practitioners Cao Dong and Niu Jinping.

Cao Dong was subsequently arrested and convicted of “meeting a distinguished foreigner.” He was sent to Tianshui prison, where he was tortured to recant his religious convictions and to denounce his meeting with me.

Niu Jinping appealed to me on behalf of his wife, Zhang Lianying, who had been in Beijing Forced Women's Labor Camp since June 2005 and so severely tortured that she suffered a coma in April 2007. The two were subsequently imprisoned again as part of Beijing’s pre-Olympic roundup.

Another of my contacts was Christian human rights attorney Gao Zhisheng, sometimes known as the “conscience of China,” who represented a number of Falun Gong practitioners after his investigation into their persecution in 2005.

Well-known in China for publicly denouncing the regime, especially for corruption, he wrote an open letter to the European Parliament through me in September 2007, and another to the U.S. Congress. He was then sentenced to prison on a charge of “subversion.”

After being temporarily released into house arrest, he was imprisoned again, and in 2008 so severely tortured that he twice tried to commit suicide. After his wife and children escaped through Thailand to the U.S.A. in January 2009, Gao was abducted by security forces, and his whereabouts are currently unknown.

Gao’s friend Hu Jia, an environmental activist, was another of my contacts who was arrested and imprisoned in 2008 after he gave evidence by telephone to the European Parliament’s Human Rights Committee. He was then awarded the European Parliament’s annual Sakharov Prize for Freedom of Expression. Hu Jia’s wife, Zeng Jinyan, was named one of the 100 most important people on earth by Time magazine for her blogs in support of Hu Jia’s activities.

These are only a few examples of some thousands that demonstrate the extent of the Communist regime’s paranoia against any activity that could threaten or destabilize the Party.

On April 25, 1999, 10,000 Falun Gong practitioners spent a day in peaceful protest in Beijing after police brutality against fellow practitioners in Tianjin City. People who were there have told me that this event was almost certainly organized by the security forces as a justification for the persecution that then began.

Falun Gong practitioners are usually imprisoned under “administrative detention” with no trial: Often they refuse to give their names to protect their families. As members of a banned “evil cult,” they suffer particularly harsh treatment, often at the hands of other prisoners and even Falun Gong who have recanted [and are forced] to demonstrate their rejection of the practice.

Former prisoners I have met, having ipso facto recanted, have suffered total sleep deprivation for a period of weeks, have then been forced to stand motionless for several days, being prodded with sharp objects to keep them awake, followed by progressively brutal treatments involving electric prods—always including the genitals—excrement, and general beatings.

Zhang Lianying, who suffered a coma, wrote me a list of the 50 progressive tortures she suffered, which I submitted to the U.N. Rapporteurs on Torture and Religious Freedom, Dr. Manfred Nowak, and Mrs. Asma Jahangir, both of whom I have met on a number of occasions.

Manfred Novak believes that some two-thirds of those undergoing “re-education through labor” in China’s prison camps, modeled on the Soviet Union’s gulag, are Falun Gong practitioners. … Falun Gong [practitioners] outside China maintain contact with prisoners and record their torture and torturers where either can be identified: Records exist of more than 3,000 who have been tortured to death since 1999.

Of particular concern is that only Falun Gong—who neither smoke nor drink—are routinely blood-tested and blood-pressure tested in prison. This is not for their well-being. They thus become the prime source for the Peoples’ Liberation Army's lucrative live-organ transplant trade: More than 40,000 additional unexplained transplants have been recorded recently in China since 2001.

Although using body parts from executed prisoners has been routine in China (in one province alone there are 16 specially-converted evisceration buses) many believe, as I do, that live Falun Gong prisoners are quarried for their body parts. Indeed, Cao Dong told me that after his best friend disappeared from their prison cell one evening, he next saw his dead body in the morgue with holes where body parts had been removed.

Ten years later, the campaign of brutal repression of Falun Gong—once encouraged by Beijing for the well-being reportedly experienced by its adherents—shows no sign of easing.

In my view, the persecution of Falun Gong amounts to genocide as defined in Article 2 of the Convention on the Prevention and Punishment of the Crime of Genocide: “any of the following acts committed with intent to destroy, in whole or in part, a national, ethnic, racial or religious group, as such: killing members of the group; causing serious bodily or mental harm to members of the group; deliberately inflicting on the group conditions of life calculated to bring about its physical destruction in whole or in part.”

It is clear that Falun Gong [adherents] are to the communist regime what the Jews were to the Gestapo. Although millions died in the gulag, it was from starvation, not systematic torture and liquidation as in China today.

In your capacity as Secretary General of the United Nations, and on this 10-year anniversary, I urge you to take action to put an end to the persecution of Falun Gong in China.

Appendix: Letter to Edward McMillan-Scott from the lawyer Gao Zhisheng, translated by an intermediary:

How are you? Writing to you is the only way of communication that I have at present. Although it is somewhat primitive or old fashioned, it is still much less primitive than the way my family and I have been handled by the Chinese Communist regime since last year. Their open disregard of human feelings and conscience in their confinement and harassment against us is simply because we try to stick to human feelings and conscience.

During such long period of loneliness, your words of concern have often been passed over, though the passing over itself has been also quite primitive. Yet, to my family, it is as if a thread of bright sunshine tearing through dark clouds to reach our hearts. On this occasion, please accept our appreciations!

Deep in my heart, I have never thought of gratitude for your persistence of condemnation against present-day Chinese evil dictatorship. In my opinion, we are common warriors conquering darkness. The Chinese Communist regime continues as an unprecedented evil regime on this planet. Its presence in China is the direct source of all sufferings and injustice there. Its history is one of committing countless crimes and covering these countless crimes. In recent years, its economic expansion, which has been gained at the expense of sacrificing the environment, human justice, human ethics as well as fundamental human nature, has generated for the dictatorship even more brutality and fearful powerfulness.

The ethical values and conscience of the entire human race is being eaten away through “trade relations, Olympic Games” and other “state” visits. Mainstream politicians from the West are aware of the current phenomenon of gaining interests at the expenses of human traditional ethic values. This interest over fundamental ethics and virtue has become a common practice of international politics. Under this situation, anything unrelated to economic interests has been openly neglected for a long time.

About Chinese Communists’ bloody persecutions against Falun Gong, diplomats from all major countries in the world are all well aware of it yet they have also dreadfully and miserably become a part of the silent community on the entire mainland China. Compared with silence from Chinese people, the one from foreign governments looks especially disgusting. To some extent, this indifference paves the way for the Chinese regime’s ruthless crackdown against domestic dissidents. The whole human race will pay a huge price for this numbness, because it has become a shocking humanitarian issue instead of a pure political one.

Today, I am not writing to compliment you, or to release my own complaints. The struggle against the Chinese Communist dictatorship is one for the human race, for lightness or for darkness, for civilization or for savageness. The cruel reality warns us that our peaceful struggle should never be relaxed! In today’s mainland China, changing the dictatorship peacefully has become a common wish.

Dear Mr. Scott, human civilization has entered current era, but this era seems to have no relation with Chinese Communist regime. Although it has got the technology to enter space, it has no intention, politically speaking, to give up its jungle games. Now Chinese Communist Party is preparing its 17th National Party Congress. Its preparation is totally operated in darkness, while its subjects are like animals or private property handed over to the next ruler. This power succession like the mafia’s has lasted since Mao. The only change is today’s successors are all in Western suits. We must work hard to change it, even if it is purely for the humanitarian value.

Dear Mr. Scott, when freedom finally arrives in China, I invite you to drink wine in Beijing, real good wine [in their first telephone conversation McMillan-Scott said he would give Gao vintage whiskey].