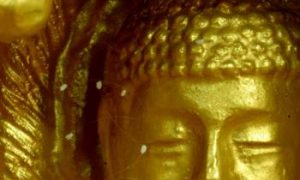 NEW YORK—Over 10,000 Falun Dafa practitioners from 57 countries and regions assembled in Manhattan on May 12 for a grand parade, the centerpiece event of World Falun Dafa Day activities in New York.

Falun Dafa, or Falun Gong, is a traditional Chinese spiritual discipline that involves slow exercises and teachings based on the principles of truthfulness, compassion, and tolerance.

Mr. Li Hongzhi, the founder of Falun Dafa, gave his first lecture 25 years ago on May 13 in his native city of Changchun, northeast China. Today, Falun Dafa is practiced by tens of millions in over 70 countries.

About 6,500 of those practitioners from around the world gathered at Dag Hammarskjöld Plaza near the United Nations headquarters in the early morning of a sunny Friday for the start of the grand parade.

Most practitioners wore yellow T-shirts or sweaters emblazoned with the words “Falun Dafa is Good” in Chinese and English.

Falun Dafa may have roots in China’s 5,000 year-old heritage, but it espouses “universal principles, so that is the reason why Falun Dafa belongs to every single culture and country,” said Oleksandr Nimenko, a 33-year-old Ukrainian practitioner who works in the film industry.

“We came in traditional costumes because we understand that Falun Dafa inspires all traditional cultures,” he said. Nimenko was wearing a grey fur hat and a black and silver 17th century Ukrainian costume. Arimna, Nimenko’s wife, wore a silvery white traditional Armenian dress.

A short rally was held in the plaza at around 9 o’clock.

Levi Browde, the executive director of the Falun Dafa Information Center, said that Falun Dafa was in its early years supported and praised by the Chinese communist regime because it brought health benefits to the Chinese people, and helped uplift morality.

But “today in China, and for the last 18 years, there has been a systematic persecution of those who practice Falun Dafa,” Browde said. Former Communist Party leader Jiang Zemin had launched a persecution campaign against Falun Dafa on July 20, 1999.

Browde said that tens of millions of people in China face arrest, torture, abuse, and even death for refusing to abandon their belief. He added that tens of thousands of Falun Dafa practitioners have been killed for their organs to supply the Chinese regime’s booming organ transplantation trade.

“It is unacceptable to put someone to death simply for believing in truthfulness, compassion, and forbearance—universal values that our modern world needs badly,” said Alan Adler, the chair of Friends of Falun Gong, a non governmental organization based in the United States.

Adler added: “The persecution of Falun Gong is not just a religious issue. It isn’t just a political one, or a Chinese one. It’s a human one, and an historic one—in the future people will look back with awe and admiration to the Falun Gong practitioners who remained true to their faith in the face of persecution.”

Anastasia Lin, the reigning Miss World Canada and a Falun Dafa practitioner, hopes that the Chinese people can understand that practitioners are people who continue to be kind and compassionate in the face of brutal repression.

Lin also expressed her admiration for Falun Dafa practitioners persisting in raising awareness about the persecution, which has been “ignored by the mainstream media.”

The parade began immediately after the half hour rally.

“I think this parade is so beautiful,” said Erle Bjornstad, a waitress and actress from Connecticut who saw the parade on 42nd Street. “It’s so nice. It’s so sweet and gentle. And people are smiling. And the colors are pastel and lovely.”

Silvia Bonome, a tourist from Montreal, was struck by the banners practitioners were carrying that reference the persecution and the Chinese regime’s organ harvesting. “It made me reflect, made me think on how it is we can help,” she said.

James Blake, a professor at the City University of New York who had stopped to observe the parade with his wife, said he wasn’t previously aware of Falun Dafa or the persecution in China.

“You don’t hear about this in the news,” he said. “There isn’t a daily briefing on CNN or anything like that.”

Blake added: “I think it’s a very powerful parade in many respects, it certainly sends a message about what’s happening to people outside of this country.”

“It’s very peaceful, and has a quiet strength to it.”

The parade’s end point was the Chinese consulate in New York, where in the evening hundreds of practitioners will gather to protest the ongoing persecution.

Irene Luo and Leo Timm contributed to this article.