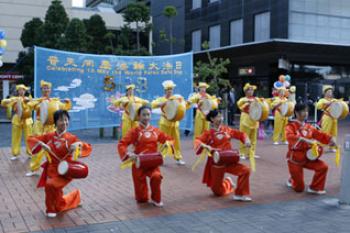 May 13 also marks the 60th birthday of the founder of Falun Dafa, Mr. Li Hongzhi, as well as the start of Falun Dafa being taught to the public in China in 1992.

The festivities started with the resounding music of the Divine Land Marching band, and was followed by a variety of  singing and dancing pieces. The crowd was also treated to instrumental performances; one on the flute and the other a duo performance on the gu-zheng, an ancient traditional Chinese instrument.

Falun Dafa consists of a meditation exercise and a series of simple standing exercises, which can lead to health benefits including improved concentration and a reduction in stress levels. The exercises are supplementary to the improvement of one's character. This is achieved by following the universal principles of truthfulness, compassion, and tolerance. Practitioners of Falun Dafa aspire to become better people.

Manuel Delgado from Mexico really enjoyed listening to the band and watching the exercises, saying, “It looks really nice because the world is so quick so this gives you a peaceful moment, I will definitely look at the information on the web site.”

With Falun Gong spreading globally since 1992, millions of people have become free of illness and have seen the resolution of various family conflicts and the discovery of the true power of kindness.

Thomas Liang has practiced Falun Gong for many years and says that he has gained many benefits. “The most important thing is that through the practice you understand the meaning of life. It has also helped me to become a better person,” he said.

While Falun Dafa Day is a joyous event, there is a more sombre side as many practitioners in China are persecuted and tortured for their belief.

Thomas said that prior to the persecution thousands of people practiced the exercises in the park, “It was all very peaceful and harmonious and I felt very happy,” he said.

Alison Lawson was very moved by the performances, saying “I found it very graceful and serene. I think what is happening in China is heartbreaking and very shocking, I wish people did not have to go through that.”

Falun Gong was banned in July 1999 by the then Communist Party leader, Jiang Zemin. Despite the remarkable effects Falun Gong was having on Chinese healthcare costs and the decreasing crime rate, when the number of Falun Gong practitioners who were gathering in parks to practice peacefully everyday grew into the millions, the communist leadership felt threatened and initiated the persecution on July 20, 1999.

Thomas gave us some insight into what it was like in China when the persecution started.

“Everything changed overnight. People could not go to the park to practice for the fear of being arrested. Many people were taken to detention centres and tortured. Sometimes it was not even possible to practice at home, as they often would break into homes and arrest people. We lived in horror and anxiety every day.”

Since the ban, hundreds of thousands of Falun Gong practitioners in China have been arrested and beaten for refusing to denounce their peaceful and healthful practice. Thousands of practitioners have also been murdered. Governments all over the world have spoken out against the persecution, the single largest transgression of basic human rights happening anywhere in the world today.