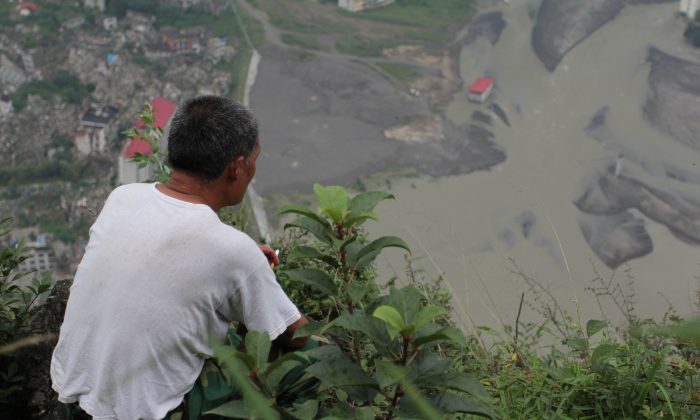 Li Mingshan, looking down at the old city, on the mountaintop after the 2008 Sichuan earthquake that decimated the community of Beichuan. (Shaoguang Sun)
Entertainment

When disaster strikes, government is there to step in and help, right? In today’s China, not necessarily.

When the 2008 earthquake hit Sichuan, the town of Beichuan was simply leveled to the ground. Documentary producer turned director Zhao Qi records the ironies and indignities of the city’s rebuilding process in “Fallen City.”

Once a community of 20,000 strong, the survivors of Beichuan now live in crude temporary housing as they await the shiny new city that the state media breathlessly promises them. Each and every one of them grieves for multiple family members.

Especially heart-rending are the Pengs, who mourn their 11-year-old daughter. Watching the inconsolable father pore over her drawings salvaged from their flat like holy relics is truly painful. They are not alone in their agony.

To add insult to injury, when the citizens of Beichuan seek traditional solace on the anniversary of the quake, the police physically prevent them from entering the “old city,” thereby undermining their attempts at closure through ritual. In fact, the disconnect between officialdom, as expressed by Orwellian newscasts, and reality is a theme running throughout “Fallen.”

In several ways, “Fallen” lets the Chinese regime off the hook, scrupulously avoiding discussion of the so-called Tofu Construction causing the disproportionate collapse of school buildings, or the Party’s concerted efforts to prevent the release of an accurate death toll.

Yet, the facts on the ground Zhao captures through his lens are impossible to miss. We see the media hypocrisy, institutionalized economic inequalities, and corrupt criminal justice system up close and personal.

Constantly documenting events since the 2008 disaster, “Fallen” represents a work of true documentary commitment from Zhao. Even those who think they have been desensitized by images of Hurricanes Katrina and Sandy will be staggered by the ghostly sight of old Beichuan.

Nonetheless, it is the pictures and video of the children (negligently) killed during the quake that will really hit audiences in the gut. Powerful and profoundly troubling, “Fallen City” is highly recommended when it airs July 28 at 10 p.m. EST on PBS. Check local listings for times.