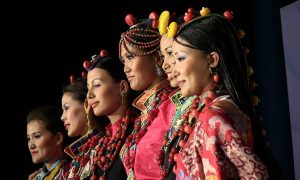 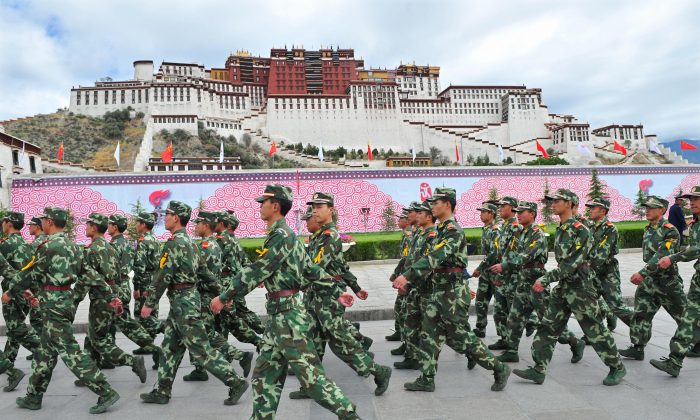 Chinese paramilitary policemen patrol in front of the Potala Palace during the ceremony for the 2008 Beijing Olympic Games torch relay in Lhasa on June 21, 2008. (TEH ENG KOON/AFP/Getty Images)
China

A leading official in the administrative region of Tibet, who was formerly the most powerful security official there before becoming deputy of the legislature, was purged recently, according to official media.

The regime’s anti-corruption agency announced on its website on June 26 that Le Dake was arrested and investigated for “serious violations of discipline and law”—Chinese Communist Party jargon for bribery and malfeasance.

As in most corruption reports, the Central Committee for Discipline Inspection didn’t go into the specifics of Le’s case, or what political intent may lie behind it. But overseas Chinese news websites, attuned to the subtleties of political struggle in China, noted Li’s deep and long-standing ties with the notorious Zeng Qinghong, the well-known henchman of former Party leader Jiang Zemin. Until 2007 Zeng was a member of the elite Politburo Standing Committee, and once ran the Party’s personnel apparatus, called the Organization Department, as well as Hong Kong affairs, and had an important role in internal intelligence.

According to overseas Chinese news publication Bowen Press, which is affiliated with the Boxun, known to traffic in insider political talk, the case against Le Dake is linked with Yang Jinshan, a former commander of the Party’s military forces in Tibet. Yang, in turn, Bowen said, was a client of Xu Caihou, formerly one of the most powerful men in the military who was purged and died last year.

Le’s removal seemed sudden, since he was seen going about his normal routine just two days before anti-corruption investigators made their move.

The suppression of the Tibetan independence movement by the local public security bureau was the most severe during Le’s tenure as public security chief, according to Bowen Press.

Le’s purge is part of a trend of public security officials being disciplined. Before Le, Beijing’s Liang Ke, and vice ministers of the state security ministry Lu Zhongwei and Ma Jian were investigated and charged with corruption. Duowei characterizes Ma Jian and Le similarly: among the several dozen intelligence men that Zeng seeded around the country, whose services could be called upon later.

Others removed, or said to be investigated, in this political circle include vice chair of the People’s Political Consultative Conference, Su Rong, and Liu Zhenya, whose son was widely reported to have made his fortune with the help of Zeng.