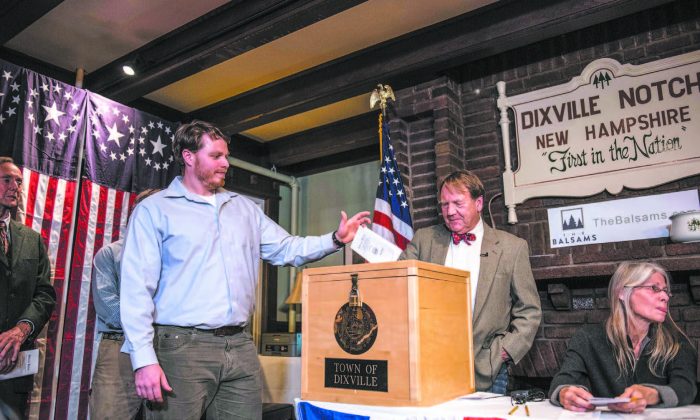 A man casts his ballot inside a polling station just after midnight in Dixville Notch, N.H., on Nov. 8, 2016. (ALICE CHICHE/AFP/GETTY IMAGES)
US

Out-of-state voters may have changed the outcome of elections in New Hampshire, where 6,540 people were recently found to have registered on the same day using out-of-state drivers licenses. In the battleground state, these votes would have been enough to determine a key 2016 election.

The discovery was revealed by the Speaker of the New Hampshire House of Representatives, Republican Shawn Jasper. Kansas Secretary of State Kris Kobach, who is also the vice chairman of the Presidential Commission on Election Integrity, published an op-ed on conservative news website Breitbart to outline the finding.

Kobach writes there is now proof for long-standing anecdotal reports that “out-of-staters take advantage of New Hampshire’s same-day registration and head to the Granite State to cast fraudulent votes.”

Theoretically, Kobach states, each of the 6,540 individuals “could have been someone who recently moved to the State and had not yet had time to get a New Hampshire driver’s license.”

Under the local law, he notes, “a new resident has 60 days to obtain a New Hampshire driver’s license.”

If this were the case, however, “they would get their driver’s license no later than January 7, 2017.” Yet, in the recent finding, as of Aug. 30, which is 10 months following the local senate elections, “only 1,014 of the 6,540 same-day registrants who registered with an out-of-state license had obtained a New Hampshire driver’s license.”

“The other 5,526 individuals never obtained a New Hampshire driver’s license. And, of those 5,526, only 213 registered a vehicle in New Hampshire,” he states.

A few thousand votes were all that was needed to determine the 2016 election in New Hampshire. Kobach noted that in the 2016 Senate race, Maggie Hassan, a Democrat, won over the incumbent Republican senator, Kelly Ayotte, by just 1,017 votes.

The presidential elections were also close among New Hampshire voters, where Hillary Clinton won by just 2,732 votes—which gained her an additional four votes in the electoral college.

New Hampshire Secretary of State Bill Gardner, a Democrat who also serves as a member of the Presidential Commission on Election Integrity, criticized Kobach’s Breitbart article. Gardner told NBC the elections recorded in New Hampshire were “real and valid.”

New Hampshire is one of 15 states that allow for same-day voter registrations. The controversial system has its costs and benefits. On the one hand, it allows people to cast their votes at the last minute, without first needing to register. On the other hand, as Kobach states, “it does not allow the state time to assess the eligibility of the voter.”

Since the state isn’t able to determine whether the individual can legally vote, that determination then falls on whoever volunteers to work the polling site. This includes taking dubious forms of identification, or sometimes merely taking the individual’s word that they’re a U.S. citizen and resident of the state who is eligible to vote.

These factors have sparked other concerns besides voting by out-of-staters. Gaps in the system were demonstrated by Project Veritas in February 2016 and in January 2012, when it sent reporters wearing hidden cameras to polling stations in New Hampshire—which at that time also did not require voter ID—and used the names of dead people they had obtained from local obituaries.

Project Veritas said in 2012, “in almost every case, saying a dead person’s name, we were handed a ballot to cast a vote.” When the undercover reporters offered to produce ID to verify their identities, in nearly every case, “we were quickly told it was unnecessary, and almost scolded for offering to show it.”