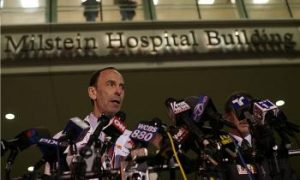 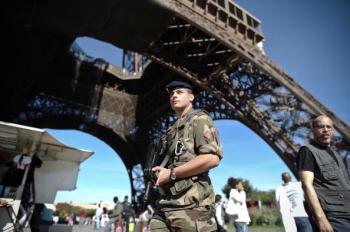 A French Army soldier is on patrol as part of France's national security alert system Vigipirate at the Eiffel Tower in Paris, on September 20. (Fred Dufour/Getty Images)
Europe

Epoch Times Staff
View profile
Follow
biggersmaller
Print
PARIS—Amid stepped-up security in Paris, prompted by intelligence reports of a renewed terrorist threat from militant Islamists, a piece of suspect luggage forced to a stop the public transit system in the French capital’s southern suburbs on Tuesday. It turned out that the item was a fake bomb.

The luggage was found around 11 a.m. at the Massy-Palaiseau train station. Security forces quickly alerted bomb disposal experts when it appeared to them that the item was not a forgotten piece of luggage.

A scan showed that it contained all the key components of a bomb. However, when the experts later made a careful visual examination, they discovered that the luggage contained wire and batteries along with hygienic paper and shampoo, all arranged to mimic the setup of a bomb.

This is the third instance in a few days of a false bomb alert in France. The Eiffel Tower and St. Michel station—where a deadly blast had killed eight people in 1995—had to be fully evacuated on Sept. 17, affecting thousands of people.

French authorities announced a week ago that the level of terrorism threat was at its highest in France. This announcement followed the government’s ban of full face-covering veils last week and alleged anti-Islam statements made by President Nicolas Sarkozy.

According to Le Figaro newspaper, Paris authorities have been advised by the Algerian government that an attack was being planned by a female suicide-bomber.

The French socialist opposition has asked for a meeting with the interior minister to receive more detailed information on the nature of the threat. Some socialist party executives hypothesized that the threat had been exaggerated to divert public attention from repeated European Union criticisms against the French government.

Meanwhile, also on Sept. 21, the militant Islamist group al-Qaeda claimed responsibility for the kidnapping of five French citizens in Niger last week, all were employees of or associated with Areva, a French global nuclear energy giant.

Despite rumors that an attack is imminent in Paris, Parisians seem more focused on whether and how they will be able to go to work next Thursday. Labor unions have called for a national strike against the reform of the pension system, and intend to paralyze most public transportation systems and services for the second time this September.