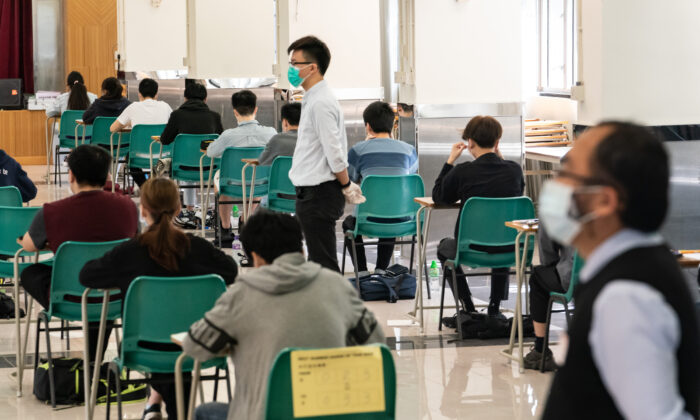 The Hong Kong Diploma of Secondary Education (DSE) will allow qualified schools for children of Hongkongers in mainland China to take the exam for most of the subjects next year. They can use the DSE results to participate in the joint university admissions to compete with Hong Kong students.

In other words, children born in Hong Kong whose father and/or mother are non-Hong Kong permanent residents studying in these schools, not only can they take most of the DSE subjects in the mainland China, but they can also use the DSE results to apply for undergraduate courses in a local university through the Joint Universities Admissions System (JUPAS) as a Hong Kong citizen.

The public is uncertain about the fairness of the university entrance exam of Hong Kong, which will take place in some schools of mainland China next year amidst keen competition among candidates of non-Hong Kong resident and Hong Kong candidates.

A former manager of the Hong Kong Examinations and Assessment Authority (HKEAA) stated that due to the new arrangement of examinations in mainland China, the principle of question setting for each subject will be “Zero Political.”

The HKEAA issued a notice on Wednesday, June 22,  stating that the DSE examination rules have been revised to allow “Hongkongers’ children’s schools” located in mainland China, that have been recognized by relevant mainland authorities as offering DSE courses, to apply to be a “school with exam center.”

Candidates from these schools will not need to come to Hong Kong to take the DSE as “self-study students”, but they can take the exam in the DSE in mainland China.

The Democratic Party was worried about whether DSE in mainland China can be as rigorous as Hong Kong, including the confidentiality of exam questions beforehand, strict invigilation, strict prevention of cheating, and fair grading.

Leo Chu Tsz-lok, spokesman for the Party’s education policy mentioned that according to the arrangement of the HKEAA, it seemed that the exam centers in mainland China may become a flaw in the invigilation.

Leo also said that in terms of invigilators, exam centers in Hong Kong are currently invigilated by teachers from different schools, and they can also supervise each other; but when the exam centers will be located in mainland China, will the statutory roles and powers of effective mutual supervision be affected overseas?

He was also concerned about whether the power of the HKEAA can be extended to mainland China, and how to ensure the confidentiality of the exam questions before the exam.

He said that the exam papers from mainland China must be sent to Hong Kong and graded together with the papers of local candidates to ensure the consistency of the scoring criteria.

Hans Yeung Wing-yu, a former manager of the Assessment Development Department of the HKEAA, said that “it is very doubtful whether the HKEAA can ensure fairness and justice,” since the schools in mainland China will operate their own exam venues. How to avoid the ‘red packet money’ (bribery) and other characteristics of mainland China?

He also pointed out that mainland Chineses and Hongkongers belong to different cultures. The former “doesn’t pay attention to rights and procedures, and issues once solved with power, later seem like they had never existed.”

Hans questioned that since the examination papers are going to mainland China, the principle of question setting after 2024 is “Zero-Political,” and there should be no criticism of mainland China and the Chinese Communist Party. This is announcing that “critical thinking” has officially come to an end in Hong Kong education.

He said that the education reform in Hong Kong must have some relation with this new exam arrangement.

“The General Education subject is considered as “anti-China and disrupting Hong Kong,” will come to an end in 2023, and then the HKEAA will set up exam centers in mainland China in the following year. The Authority must ensure that the exam is “non-toxic in terms of political” before it can enter the country of “dynamic Zero-COVID.”

In other words, in order to avoid political turmoil in mainland China, “non-toxic exam questions” will be the top priority for setting the exam papers.”

He also doubted whether allowing the children of Hongkongers to take DSE in mainland China is just the first step. Will the DSE be promoted to non-Hong Kong candidates in the near future?

Impact of 200,000 Children from Birth Tourism

Hans pointed out, “The CCP has always done things step by step, following the boiling frog theory.” The Authority is allowing Hong Kong children in mainland China to take DSE, but in fact the Authority had already gone to Shenzhen to promote DSE when it was launched. ” The Authority always intends to promote this ‘internationally recognised examination’ to non Hongkongers.”

He cited that JUPAS will further include non-Hong Kong candidates from mainland China in the future, and DSE will become a springboard for Mainland Chinese students to study abroad. Students in Hong Kong will face keener competition when more people take the exam. He believed that this is the reason why parents and candidates pay attention to this news, as DSE should be a selection system that prioritises Hongkongers.

“Of course, in the new era of the National Security Law, the word ‘should be’ has lost its meaning.”

Hans believed that according to the current speed of change, it is estimated that the education system and the examination system of Hong Kong will be “integrated into the systems of mainland China” before 2030.