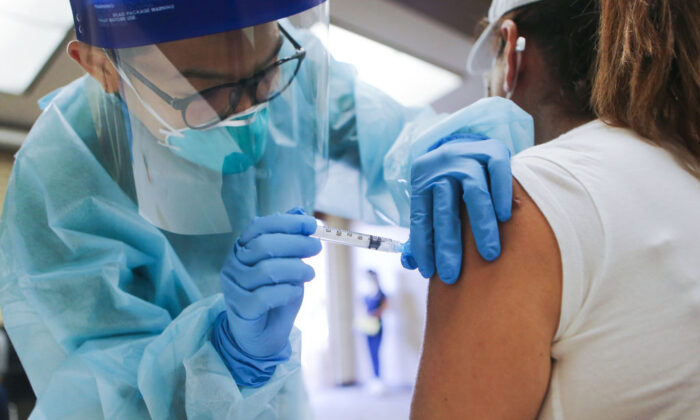 A nurse administers a flu vaccination shot to a woman at a free clinic held at a local library in Lakewood, Calif., on Oct. 14, 2020. (Mario Tama/Getty Images)
Australia

The Australian Fair Work Commission (FWC) decision to uphold the dismissal of Jennifer Kimber, an aged care receptionist, who refused the influenza vaccination was likened to a “system of medical apartheid,” a commissioner said.

In April 2021, FWC rejected Kimber’s application for unfair dismissal after ruling the dismissal was not “harsh, unjust, or unreasonable,” a decision that was upheld on Sept. 27.

Kimber received flu shots in 2015 and 2016 but soon developed severe skin inflammation all over her body that lasted 10 months. She considered her 2016 flu shot as the cause of her condition and refused subsequent flu shots.

However, in March 2020, the government made it mandatory for all aged care workers to receive a flu vaccination as part of its response to address COVID-19.

FWC vice president Adam Hatcher and commissioner Bernie Riordan who refused Kimber’s appeal, concluded that she held a “general anti-vaccination position” and was therefore unsuitable to work in an aged care position.

“It also further points to the lack of utility in granting permission to appeal, since there could be no possibility of granting Ms Kimber’s preferred remedy of reinstatement absent an advance commitment from her to take the COVID-19 vaccine,” the majority wrote in their decision.

However, FWC deputy president Lyndall Dean strongly rejected the majority stance, writing she had never “more strenuously disagreed” with the outcome of an unfair dismissal application.

“More egregious, however, is that the Majority Decision has denied Ms Kimber the protections afforded by the Fair Work Act in part because of “an inference that she holds a general anti-vaccination position,” Dean wrote.

Dean said all Australians should vigorously oppose the introduction of “medical apartheid and segregation,” which she described as the “anthesis” of the country’s values.

“Australians should also vigorously oppose the ongoing censorship of any views that question the current policies regarding COVID,” she said. “Science is no longer science if it a person is not allowed to question it.”

Dean also showed disagreement with politicians who have stated that unvaccinated individuals are a threat to public health and should be “locked out of society.”

“[These] are not measures to protect public health,” she said. “These measures can only be about punishing those who choose not to be vaccinated.”

Hatcher and Riordan said it would be entirely against the public interest to grant Kimber permission to appeal.

“We do not intend, in the circumstances of the current pandemic, to give any encouragement to a spurious objection to a lawful workplace vaccination requirement,” they wrote.

But Dean believes that all Australians, regardless of vaccination views, are entitled to protections of the law, and hoped the majority ruling in Kimber’s case is “recognised as an anomaly and not followed by others.”

“This is the first FWC Full Bench decision on the issue of vaccination mandates to be handed down during the pandemic,” Willox said. “It is pleasing that the Full Bench has supported an employer’s right to mandate vaccinations where reasonable in the circumstances.”