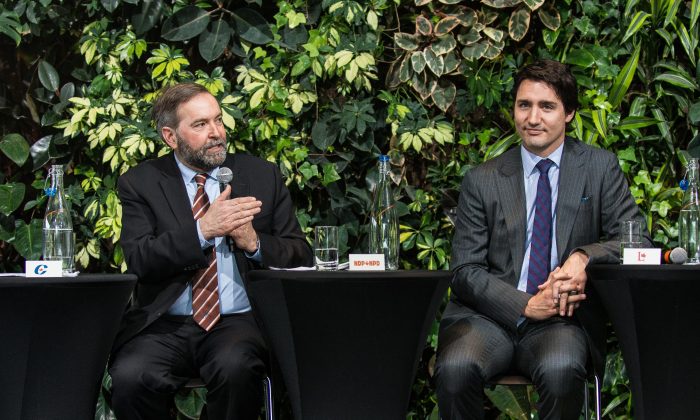 PARLIAMENT HILL—If you don’t vote, you don’t matter, at least according to some. But what if you do vote, and the person you vote for doesn’t matter? Or if you want to vote, but you don’t have the documents that matter?

It’s a trifecta of problems that was front and centre Tuesday in Ottawa.

Conservative MP Michael Chong is praised for tabling a bill that could do much to fix Canada’s democracy, but he found himself in an awkward position during iVote, a debate of sorts Tuesday afternoon at the University of Ottawa.

Participating with Chong were NDP leader Thomas Mulcair, Green leader Elizabeth May, and Liberal leader Justin Trudeau, talking before students about the importance of voting.

The debate wasn’t planned around Bill C-23, the government’s Fair Elections Act, but the timing was ideal. Critics of C-23 say the bill would make it harder for students, aboriginals, and marginalized groups to cast a ballot.

Students attending iVote seemed to be mainly left-of-centre voters judging by the yells and cheers for May, Mulcair, and Trudeau. Chong’s supporters were notably quieter, but there were some, including a group that lined up to meet him after the event.

Chong was often left trying to defend government policies particularly unpopular among environmentally inclined students, like when one student asked about the role of science-based decision making, something the Conservatives are criticized for weakening.

The three opposition leaders trotted out a long list of controversial decisions the Tories have made, such as ending the mandatory long-form census or closing several fresh lake fisheries libraries that ranked among the best in the world.

But Chong did have a credible position on what it takes to get Canadians engaged and out to the polls: His private member’s bill, the Reform Act, is lauded by many as a solution to Parliament’s decades-long deterioration.

Chong wants to take power out of the hands of party leaders and give it back to individual MPs so they can better represent their constituents.

Instead, many believe their MP is more accountable to the party than to the people who voted for him, said Chong. “That has to change.”

While Chong believes parties have a role to play in democracy, too much power now rests in the party leaders’ offices. “We have a problem,” he said.

Chong is in a unique position. His private member’s bill is seen by some as a saving grace of sorts, proof positive that the Conservative party doesn’t have it in for Parliamentary tradition. To that end, he’s working the backroom garnering support for his bill and will introduce amendments to help it get passed.

Chong thinks having effective MPs is key to getting Canadians engaged in democracy.

Of course, making it easy to vote also helps, according to experts testifying at Parliament’s Procedure and House Affairs Committee now studying C-23.

In Vancouver, where rampant drug abuse has ravaged the Downtown Eastside, voters can even bring prescription drug bottles as a form of ID, explained Keith Archer, Chief Electoral Officer for B.C.’s provincial elections.

Critics have focused on two provisions as particularly troublesome: an end to vouching, and silencing the Chief Electoral Officer.

The government says its plan to eliminate vouching, which lets one properly registered voter vouch for someone else lacking proper identification, is meant to safeguard elections from fraudsters.

The bill would also forbid the Chief Electoral Officer from encouraging Canadians to vote or communicate anything beyond how, when, and where to cast a ballot.

Tories on the committee argued that making that information plain will encourage voters. Meanwhile, there is no evidence that other campaigns, including those targeted at low turnout among young voters, have had any effect, they say.

One of the few experts who gave C-23 what the government has accepted as a passing grade was Jean-Pierre Kingsley, the former federal Chief Electoral Officer. In February, Kingsley was asked during an interview on CBC to grade the bill. After he said it was good, the reporter suggested perhaps a B-plus, to which Kingley replied, “How does an A-minus sound.”

“Overall it looks like a good bill,” he said at the time.

It was as close as an endorsement as the bill has received, and a grade the Conservatives have often touted.

But on Tuesday, Kingsley said there were several essential changes the bill needed and that he stands behind the comments of one of the bill’s strongest critics, his successor, current Chief Electoral Officer Marc Mayrand.

Mayrand lambasted the bill in the committee’s previous meeting, noting that Canadians have a constitutional right to vote and changes contained in C-23, including the end to vouching and the use of voter identification cards as an accepted form of ID, could prevent vulnerable and marginalized members of society from exercising that right.

Kingsley said Mayrand has the right to speak broadly to Canadians on elections, including when irregularities appear.

“His overarching concern is the integrity of our electoral system,” he said.

Kingsley said if provisions in C-23 that silence the Chief Electoral Officer are not taken out, “Canadians will lose their trust and their confidence in our elections. That is not acceptable.”

Kingsley was also blunt on the plan to end vouching.

“This will directly affect the constitutional right to vote of a significant number of Canadians without justification,” he said.

There are no problems with vouching, said Kingsley, but any perception that there are problems could be addressed by having voters sign a written oath so there was documentation.

Kingsley hasn’t recanted the A-minus, but he’s also refused to re-confirm it. On Tuesday he was asked repeatedly, both by MPs and reporters, to confirm the grade.

His position now is that with the bill in committee and likely to be amended, any evaluation of its current text is purely speculative.

“If they don’t do any changes, are you still going to give this an A-minus?” asked Liberal MP Kevin Lamoureux.

“’If they don’t do any changes’ is a theoretical question. I will address it when it is a reality,” said Kingsley.

The committee will hear several more witnesses on the bill before making any amendments. Those amendments would require the support of the committee’s Conservative majority.