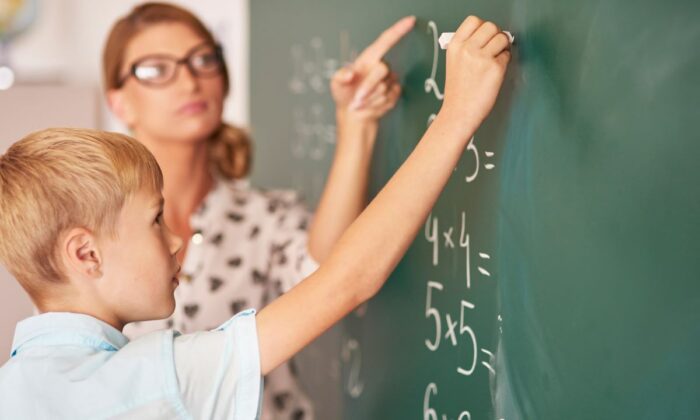 “Myths have become so commonplace because teachers are regularly misinformed about how students learn and what works in the classroom,” Powell said.

The researchers are calling for more evidence-based mathematics education rather than inquiry learning, the current prevalent method used in classrooms.

Australian student achievement in the PISA tests has declined “more steeply and consistently” than every OECD country besides Finland since it began in 2000. This decline has been the most pronounced in maths.

The authors argue against seven narratives commonly held in the maths teaching sphere, including that teaching procedures after conceptual knowledge is learnt, teaching algorithms is harmful, and inquiry-based learning is the best learning approach.

“While some students may thrive with true inquiry-based learning, their success is an exception rather than the standard outcome,” the report said. “Novice learners, for whom the concepts and procedures are new or not-yet understood, benefit from explicit instruction more than inquiry-based learning.”

Unoptimised maths teaching methods in early years can often leave a student struggling to excel in maths later down the road and in turn, disengage from the subject altogether.

“Mathematics builds in complexity; perhaps that is why early performance in mathematics relates to future performance,” the report said.

The Australian Mathematical Sciences Institute (AMSI), the peak body for mathematical sciences, revealed in April that Year 12 enrolments in maths had dropped to an “alarming new low.”

It reported that around 72 percent of students enrolled in one or more maths subject in the last decade until 2020, when this figure dropped to 66 percent.

AMSI warned that this posed a risk to the future of Australia’s workforce, with 75 percent of the fastest-growing employment areas requiring STEM skills.

“Mathematics skills are essential across so many industry sectors, and the severity of this situation will impact Australia’s innovation capabilities. Action must be taken now—these students are our future workforce,” AMSI Director Tim Marchant said.

While aiming to reverse the downward trend of overall education standards, Australia’s national curriculum was reviewed and revised before it was finally endorsed by education ministers in April.

During the review, the former Education Minister Alan Tudge had called for the draft curriculum to be fundamentally changed due to the prevalence of “ideology over evidence” and inquiry-based learning approaches.