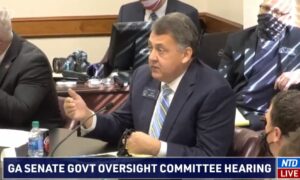 Surveillance footage released during the election hearing in Georgia showed that after election workers kicked poll observers out of the building, they pulled out boxes filled with ballots that were hidden underneath a table, and then spent hours running them through the tabulating machine while no one was around.

According to witness testimony, this area shown on the CCTV is where absentee and military ballots were being tabulated on Election Night.