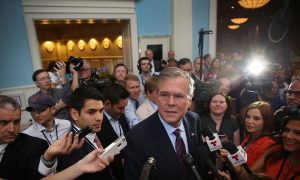 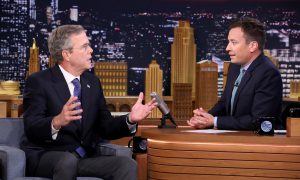 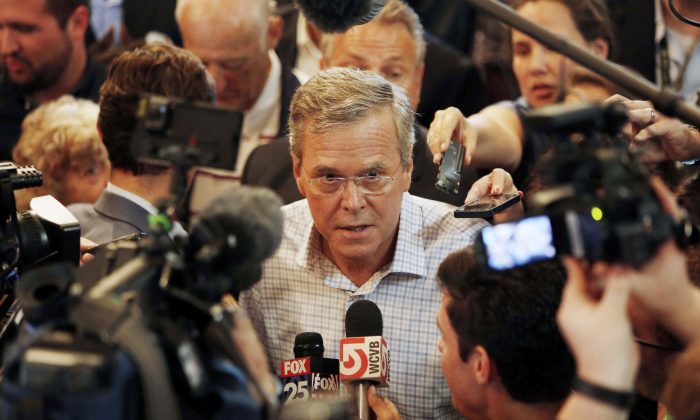 WASHINGTON—Republican presidential candidate Jeb Bush says there’s “not a reason in the world” why the U.S. economy can’t grow at 4 percent annually.

Actually, there are a bunch of reasons it probably can’t.

Many economists say the U.S. economy is ill equipped to grow consistently at even close to 4 percent. Current forecasts put growth averaging half that rate. Any president, Republican or Democrat, would have to overcome decades-long trends that are largely beyond the control of the Oval Office.

Those trends include the retirements of the vast generation of baby boomers — an exodus that limits the number of workers in the economy. Rising automation and low-wage competition overseas are among other factors. A result has been meager income growth, which has cut into the consumer spending that drives most economic growth.

“It would require substantial changes in fiscal and regulatory policy that I don’t believe any president could reasonably expect to enact in one term,” said Robert Stein, an economist at First Trust Advisors who was a Treasury Department official during George W. Bush’s presidency.

In his campaign announcement on Monday, Jeb Bush said “there is not a reason in the world why we cannot grow at a rate of 4 percent a year. And that will be my goal as president – 4 percent growth, and the 19 million new jobs that come with it.”

The pledge originated from a plan by the George W. Bush Institute to achieve growth averaging 4 percent for a decade.

Conservative economists defend the target as aspirational, a pledge that would leave the economy better off even if the next president fell short.

“I’m less concerned about the number than the commitment to grow rapidly,” said Douglas Holtz-Eakin, an economist who has advised Republican presidential candidates and now serves as president of the American Action Forum.

The historical odds of doubling growth from its current level are low.

Only four of the 16 presidential terms since World War II have experienced annual economic growth averaging more than 4 percent after inflation, according to research published last year by Princeton University economists Alan Blinder and Mark Watson.

President Harry Truman reaped the peace dividend as U.S. manufacturers helped rebuild nations devastated by World War II. The Kennedy and Johnson administrations enjoyed a boom because of tax cuts. And President Bill Clinton benefited during his second term from low interest rates and what eventually became a tech-stock bubble.

There are two primary ways to grow an economy faster: add more workers or increase their efficiency so that each hour on the job generates more income. Neither factor looks spectacular enough to deliver 4 percent growth, particularly since the share of Americans working has drifted downward as the number of retirees has increased.

“The demographics right now are for slowing population growth,” said Chad Stone, chief economist at the Center on Budget and Policy Priorities, a liberal think tank.

The economy has 157.5 million workers, including the unemployed on the hunt for a job, according to the Labor Department. Their ranks increased just 0.3 percent in 2014, the best year for hiring since the late 1990s. When economic growth averaged roughly 4 percent during Clinton’s second term, the growth rate for the number of workers joining the economy averaged 1.5 percent, nearly five times higher than the current level.

Because baby boomers are starting to retire, the nonpartisan Congressional Budget Office expects the rate will remain low and hinder broader growth. The CBO in January estimated that growth would average just 2.1 percent annually from 2018 to 2025.

In theory, Bush as president could overcome that obstacle by welcoming substantially more immigrants in the United States. This would cause the growth rate of workers to rise much more quickly, said Michael Strain, deputy director of economic policy studies at the American Enterprise Institute, a conservative think tank.

But efficiency gains — what economists call productivity — would still be a challenge.

For the past seven years, productivity growth has averaged a poky 1.4 percent, according to the Labor Department. That’s nearly half its rate between 2000 and 2007. Economists say it’s generally difficult for government policymakers to unleash sudden bursts of productivity.

One easy form of boosting productivity would involve government spending in infrastructure such as roads, bridges, ports and airports.

Josh Bivens, director of research at the liberal Economic Policy Institute, sees these investments as the “most reliable lever” to bolster productivity. Yet he notes that a 10-year, $2.5 trillion government infrastructure program would increase economic growth only 0.2 to 0.3 percent annually.

That increase would not be nearly enough to achieve consistent 4 percent growth after inflation.

And the Republican presidential candidates have been committed to finding ways to shrink government’s footprint instead of introducing new spending programs.