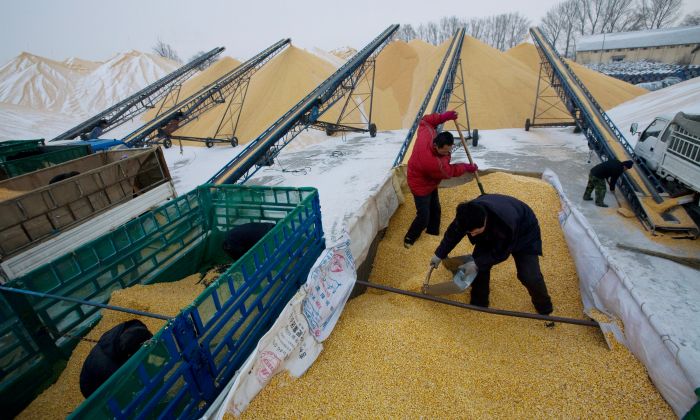 The Chinese regime recently held a nationwide video conference for officials in charge of the country’s grain reserves, urging them to complete inspections.

Given the timing, observers believe the Chinese regime is seeking assurances that the country has enough food supply in the event that U.S. agricultural imports are impacted amid U.S.–China trade talks.

For food security, the Chinese regime has implemented a system of grain reserves. State-run food companies fill warehouses with grain purchased from local farmers, and prices are kept low with subsidies from the central government.

The inspections for quantity and quality were first announced by China’s State Council in July 2018, and began in March. Because state-run granaries frequently have been exposed for misreporting data, such as claiming new harvest grains when in fact old or low-quality grains were in storage, authorities initiated the check-up.

This is the third national inspection since 2000. The previous two happened in 2001 and 2009. But this time is unusual in that the Chinese regime has sought to speed up the progress.

The National Development and Reform Commission (NDRC), an agency under the State Council that is in charge of strategic planning, reported that officials from the National Food and Strategic Reserves Administration (NFSRA) attended the May 7 video conference about the grain reserve inspections.

The conference was held shortly after President Donald Trump announced in a surprise Twitter post that the administration would raise tariff rates on $200 billion worth of Chinese goods and soon impose duties on another roughly $325 billion worth of imports.

Soon thereafter, Meizhou Daily, the Chinese Communist Party’s (CCP) state-run newspaper in Putian City, Fujian Province, reported on May 7 that the city government has begun inspections on May 6, and planned to finish with all city granaries by May 30.

But the NFSRA warned about the poor quality of the grains. “About one-sixth of the grain stocks are stored inside a simple warehouse, which means there are big risks associated with storage. The grains can easily become mildewed and deteriorate.”

Back in late 2018, several grain warehouses were reported to have caught on fire shortly after the inspections were announced. In each incident, the granary claimed that hundreds of tons of grains were destroyed. Chinese media and netizens suspected that local officials set the fires themselves to hide deficiencies in the grain depots, given past examples of fires erupting before authorities’ inspections.

According to official government and customs data, China produced 657.8 million tons of grain in 2018, and imported 115.6 million tons, valued at $45.87 billion.

As domestic production cannot keep up with demand, China imports much of its grains from one of the world’s biggest agricultural producers, the United States—especially soybeans and sorghum.

According to the U.S. Trade Representative’s office, the United States exported $3.1 billion in soybeans and $530 million in coarse grains to China in 2018.

U.S.-based China affairs commentator Tang Jingyuan told The Epoch Times on May 9 that the Chinese regime was eager to conduct granary inspections because it wanted to know the true amount of reserves, then judge how long time China can survive on domestic supply.

In December 2018, China promised to buy more U.S. agricultural products, despite the self-imposed tariffs, as a goodwill gesture amid an agreed-upon truce between Trump and Chinese leader Xi Jinping. China soon purchased orders of U.S. soybeans.

But as the trade negotiations head toward the 11th—and possibly final—round of talks in Washington this week, with both sides playing tough, the political situation could change for the Chinese regime.

“If U.S.-China trade talks worsen, whether it’s that the U.S. stops its exports to China, or the Chinese side cannot buy more American grains due to high tariffs that the CCP itself imposed, China will face enormous pressure,” Tang said.

He added: “This is the typical embodiment of the CCP’s [Chinese Communist Party] bottom-line thinking. They have to figure out how many chips they have in the U.S-China trade talks,”

Xia said in an interview with the Chinese-language Epoch Times that this is because investors in China believe Chinese grain companies stand to profit; if the trade war impacts China’s grain imports and exports, China’s grain wholesale and retail prices will go up.

Tang predicts that if grain imports from the United States are restricted in any way, “two things will create social crises and threaten the CCP’s rule: People will be angry when they go hungry without food. Costs of products made from grains, such as oil, and livestock and poultry products [that rely on grains for animal feed] will increase, which will then cause inflation,” Tang said.

A previous version of this article misstated the source for data on U.S. agricultural exports to China. The Epoch Times regrets the error.