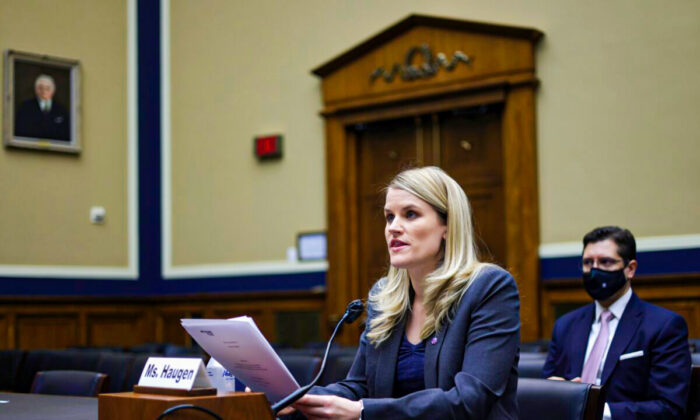 Former Facebook employee Frances Haugen testifies during a hearing before the Communications and Technology Subcommittee of House Energy and Commerce Committee, on Capitol Hill in Washington, on Dec. 1, 2021. (Alex Wong/Getty Images)
Business & Markets

During a recent interview, Haugen said that Musk’s plans to take Twitter private could give him the chance to change up the company’s business model and prioritizes user safety.

She said Meta CEO Mark Zuckerberg has “surrounded himself with people who tell him what he wants to hear.” But in comparison, she believes Musk is better able to take hard feedback and make meaningful changes.

Haugen also said that the “number one” thing Musk can do to improve Twitter is “institute real transparency.”

Musk has said he wants to open source Twitter’s algorithm, which will make it more transparent to people outside the company.

The Tesla CEO has also said he wants to emphasize “free speech” on Twitter.

“One of the key parts about a system as critical as Twitter for our democratic processes is whether or not people trust that the system is fair. And right now, I would say that trust in Twitter is a little bit in flux,” Haugen said.

Removing it from the public markets gives us new options that aren’t censorship. https://t.co/zyhbeukRJR

Ad biz = Twitter had to weigh every product safety change vs small declines in usage or user numbers.

Also Read: Facebook Whistleblower Says She is Fine Financially Because Of Buying Crypto ‘At The Right Time’