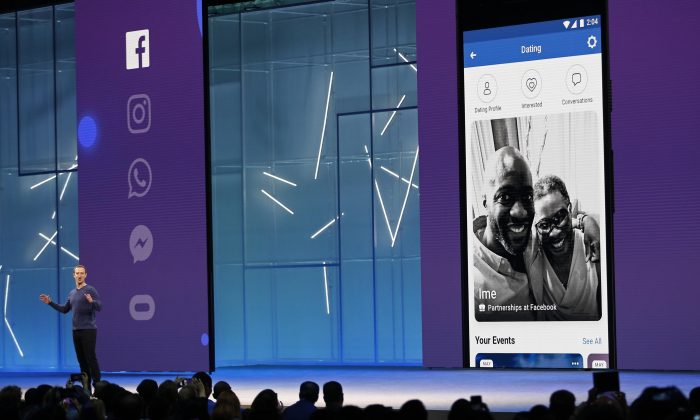 SAN JOSE, California—Facebook Inc is entering the dating game, Chief Executive Mark Zuckerberg said on Tuesday, planning a dating service to matchmake millions of people on the world’s largest online social network and nudge them into spending more time there.

The service, which Facebook had considered offering for over a decade and will launch soon, could help rebuild its popularity among younger consumers and make people visit the site more often, two key challenges for the business.

“There are 200 million people on Facebook that list themselves as single, so clearly there’s something to do here,” Zuckerberg told software developers at Facebook’s annual F8 conference.

Facebook shares rose 1.1 percent to close at $173.86 on the news, which sparked a sell-off of established online dating service providers.

Facebook users have been able to reveal their relationship status on the network since it first went live in February 2004.

Zuckerberg said Facebook was building the dating service with an emphasis on privacy, a sensitive subject for people who use dating websites and for Facebook as the company reels from a scandal over its handling of personal information.

A dating service could increase the time people spend on Facebook and be a “big problem” for competitors such as Match Group Inc, said James Cordwell, an analyst at Atlantic Equities. Match, the owner of popular mobile dating app Tinder and OkCupid, calls itself the “global leader in dating” on its website.

“But the initial functionality looks relatively basic compared to those offered by Match’s services, so the impact Facebook has on the dating space will be down to how well it executes in this area,” Cordwell said.

Facebook said in January that at the end of 2017 time spent by users had fallen by about 50 million hours a day, after changes designed to reduce passive video watching and stem the spread of sensationalism.

A prototype displayed on screens at the F8 conference showed a heart shape at the top-right corner of the Facebook app. Pressing on it will take people to their dating profile if they have set one up.

Potential matches will be recommended based on dating preferences, things in common and mutual friends, Facebook said in a statement.

The prototype was built around local, in-person events, allowing people to browse other attendees and send them messages.

It did not appear to have a feature to “swipe” left or right on potential matches to signal interest, as Tinder and other established services have. But there were two buttons for “pass” and “interested.”

The optional feature will be for finding long-term relationships, Zuckerberg said. It will be launched soon, he added, without giving a specific date.

More details will be revealed over the next few months, Facebook Chief Product Officer Chris Cox said in a separate presentation.

Cox said he had been thinking about a Facebook dating feature since 2005, when he joined the company about a year after its founding.

The company began seriously considering adding a dating service in 2016, when Zuckerberg posted on his Facebook page a photo of a couple who had met on the network, Cox said.

Thousands of people responded to Zuckerberg’s post with similar stories about meeting partners on Facebook, Cox said. “That’s what got the gears turning,” he said.

People will be able to start a conversation with a potential match by commenting on one of their photos, but for safety reasons that Cox did not specify, the conversations will be text-only, he said. Unsolicited nude photos are a recurring worry on dating services.

Facebook executives were quick to highlight other features for safety and privacy, noting that dating activity would not show up in Facebook’s centerpiece News Feed.

Concerns about privacy on Facebook have grown since the social network’s admission in March that the data of millions of users was wrongly harvested by political consultancy Cambridge Analytica.

Before building Facebook, Zuckerberg created a website called Facemash that allowed people to choose the more attractive of two women. Zuckerberg, 33, has described the website as a school prank when he was young.

A dating service “represents a potentially challenging situation if Facebook can’t fulfill its promise to offer dating services in a privacy-protected and safe way,” said Debra Aho Williamson, an analyst at eMarketer.

However, “I’m sure it will make good use of the data Facebook has been able to collect about its users,” she added.

Zuckerberg also said on Tuesday that Facebook was building a “clear history” privacy control to delete browsing history, similar to the option of clearing cookies in a browser.