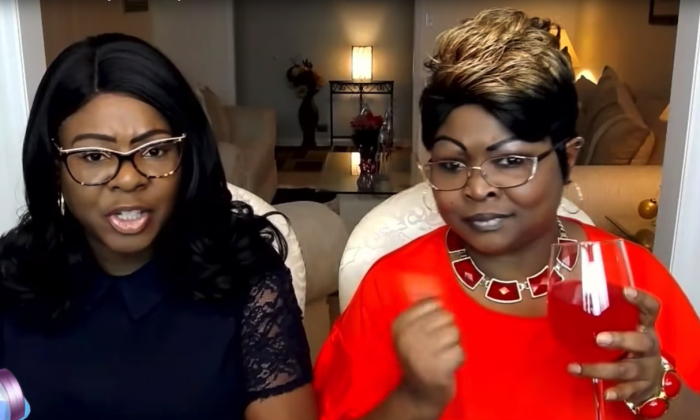 The sisters behind the popular conservative pro-Trump video blog “Diamond and Silk” called on the Trump administration to investigate social media giants after Facebook notified them that their content is “unsafe to the community.”

Lynette “Diamond” Hardaway and Rochelle “Silk” Richardson are former Democrats from North Carolina who quit the party to support Trump. They claim that in September last year they noticed a significant drop in reach on their Facebook page, which has 1.2 million followers.

The pair say they’ve been back and forth with Facebook for the seven months since the drop. On Friday, they received a message from the social media giant’s policy team saying that the Diamond and Silk brand and content are “unsafe.”

“The Policy team has came to the conclusion that your content and your brand has been determined unsafe to the community,” Facebook wrote, according to the sisters. “This decision is final and it is not appeal-able in any way.”

Hardaway and Richardson launched a social media spree upon receiving the message, calling Facebook’s move “deliberate bias censorship and discrimination.” The sisters called on the Trump administration to investigate social media giants, according to a radio interview on New York’s AM 970 The Answer. Facebook is a private company, but since the service is open to the public, everyone must be treated the same, Hardaway said.

The sisters believe Facebook’s move has something to do with the upcoming midterm elections.

“They don’t want us to be heard because basically an election is coming up,” Hardaway said on Fox News. “President Trump won this election by the people, we the people, through social media. And whenever they found out that’s how he won it, that’s why they are shutting down conservative voices—people that are pro-Trump.”

The sisters have had their Facebook page since 2014. They often appear on Fox News.

“I don’t believe in big government, but I do believe that maybe our government should look at the social media platforms,” Diamond told AM 970 New York. “Because let me tell you something, they dominate about 90% of the world now. Think about that. I’m talking about the world. Not just the United States. I’m talking about the world. So that means that they can silence your voice and it will only be one point of view and that is dangerous.”

This isn’t the first time the sisters have called out censorship by social media giants. Last year, Diamond and Silk said that YouTube demonetized 95 percent of their videos. After the pair fought back, YouTube replied with instructions on how to make their content compliant.

Facebook did not provide Diamond and Silk with any examples of infringing content. A company representative told Fox News that Facebook is “reaching out to the creators of Diamond and Silk to try to resolve this matter.”

“I find it offensive, appalling, that they will deem us, two black women, two black chicks down with politics, as being unsafe,” Hardaway said. We aren’t a menace to society, we aren’t hoodlums, we don’t sell drugs, we don’t lay out in the streets.”