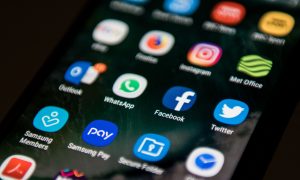 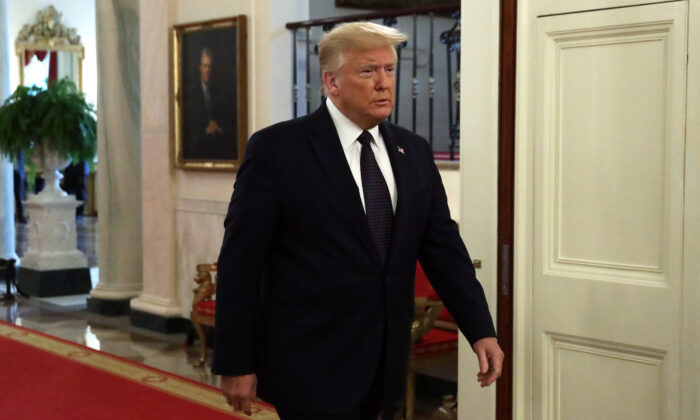 President Donald Trump arrives for an event at the White House in Washington on June 17, 2020. (Alex Wong/Getty Images)
2020 Election

The campaign ran advertisements encouraging people to sign a petition opposing the anarcho-communist group Antifa. The posts included an inverted red triangle that a Trump campaign official said is used by members of Antifa; some critics countered that the symbol was used by the Nazis.

“We removed these posts and ads for violating our policy against organized hate. Our policy prohibits using a banned hate group’s symbol to identify political prisoners without the context that condemns or discusses the symbol,” a Facebook spokesperson said in a statement explaining the removal.

“The inverted red triangle is a symbol used by Antifa, so it was included in an ad about Antifa,” Tim Murtaugh, communications director for the Trump campaign, told The Epoch Times in a statement.

“We would note that Facebook still has an inverted red triangle emoji in use, which looks exactly the same, so it’s curious that they would target only this ad,” he added. “The image is also not included in the Anti-Defamation League’s database of symbols of hate. But it is ironic that it took a Trump ad to force the media to implicitly concede that Antifa is a hate group.”

Jonathan Greenblatt, CEO of the Anti-Defamation League, said in a June 18 statement: “The Nazis used red triangles to identify their political victims in concentration camps. Using it to attack political opponents is highly offensive.”

Advertisements featuring the symbol posted on the Facebook accounts of Trump, Vice President Mike Pence, and the Trump campaign warned people of “dangerous MOBS of far-left groups,” while encouraging them to sign a petition against Antifa, which openly espouses violence and has been linked to some of the violence at and near recent protests.

Facebook’s action comes amid increasing friction between tech giants and lawmakers, who are pushing to change rules that shield the companies from liability for content users’ posts.

The Department of Justice this week presented a series of proposals that would curtail the protections for online platforms.

“When it comes to issues of public safety, the government is the one who must act on behalf of society at large. Law enforcement cannot delegate our obligations to protect the safety of the American people purely to the judgment of profit-seeking private firms. We must shape the incentives for companies to create a safer environment, which is what Section 230 was originally intended to do,” Attorney General William Barr said in a statement.

“Taken together, these reforms will ensure that Section 230 immunity incentivizes online platforms to be responsible actors,” he added.