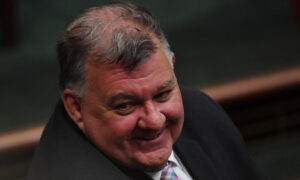 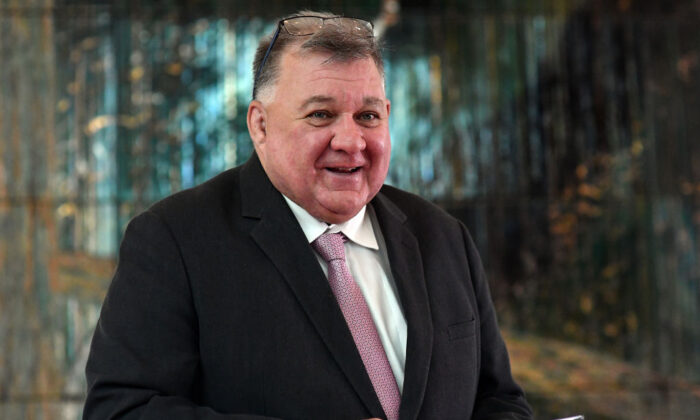 Federal MP Craig Kelly prior to addressing the media over his concerns with the AstraZeneca vaccine and blood clotting during a press conference in the Mural Hall at Parliament House in Canberra, Australia on Mar. 16, 2021. (Sam Mooy/Getty Images)
Australia

“We don’t allow anyone, including elected officials, to share misinformation about COVID-19 that could lead to imminent physical harm or COVID-19 vaccines that have been debunked by public health experts,” a Facebook spokesperson said.

However, according to Kelly, Facebook did not provide information regarding the posts that led to the suspension of his account.

Previously, Kelly had made several posts that shared data or linked to studies supporting information that was not in line with official Australian health guidelines.

“Everything that I’ve posted is 100 percent backed up by the science, the evidence, expert opinions of highly qualified people around the world,” Kelly told The Epoch Times.

“A society where someone that has an alternative opinion to you is spreading misinformation is a fascist, totalitarian society.”

While it is unclear why Kelly was banned specifically, some of his recent posts include reporting on rare blood clots following AstraZeneca vaccinations, both in Australia and abroad.

Kelly also made posts that linked to data in support of Ivermectin as an alternative form of treatment for COVID-19, a drug that has not been approved by the Australian Government Department of Health due to insufficient evidence.

According to Monash University, an Australian peer-reviewed study in April 2020 showed that a single dose of Ivermectin could stop the SARS-CoV-2 virus growing in cell culture but was not approved due to a lack of clinical trials.

In a post, Kelly linked an Ivermectin analysis website that lists 52 studies, of which 24 are peer-reviewed, detailing the effects of Ivermectin in early and late treatment of COVID-19.

Kelly had also proposed a “No Vaccine Passports” bill, with other remarks including opposing the need for children to wear masks—a statement that drew backlash from the media.

A few months later, Kelly shared an article by the American Institute for Economic Research (AIER), which said that YouTube took down an AIER-linked video containing comments by Harvard Professor Martin Kulldorff.

Kelly resigned from the Liberal Party in February and joined the crossbench following pressure on the government due to his views on COVID-19 treatments that were not approved by the Department of Health.

Kelly also regularly made posts condemning the Chinese Communist Party’s influence in Australia, including criticising the Belt and Road initiative and Confucius institutes in Australian universities.

Kelly had one of the largest engagements of any Australian politician on Facebook, garnering around 1 million engagements per month.

“It’s just an appalling state of affairs that a foreign entity like Facebook would censor an Australian elected member of parliament,” Kelly said.