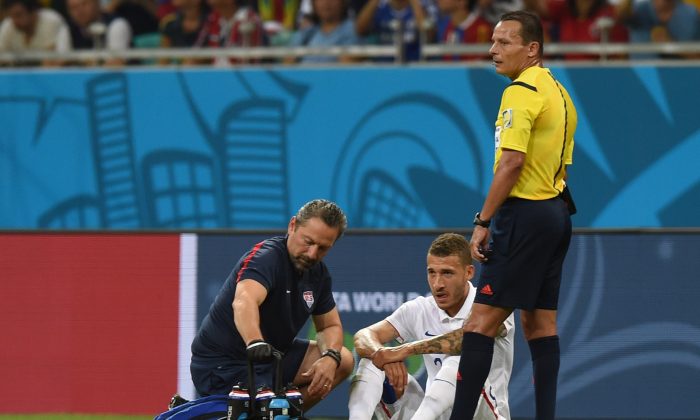 US defender Fabian Johnson (C) is treated by medical staff during a Round of 16 football match between Belgium and USA at Fonte Nova Arena in Salvador during the 2014 FIFA World Cup on July 1, 2014. (FRANCISCO LEONG/AFP/Getty Images)
Soccer

Fabian Johnson pulled up injured in the 31st minute while playing against Belgium.

DeAndre Yedlin replaced him as a substitute.

RECIFE, Brazil (AP) — If there’s such thing as a Manaus hangover, U.S. players insist they will be no part of it.

One less day to recover than Germany? No big deal.

The Americans are going into the biggest match most have ever played looking to break one streak and start another.

England, Italy, Cameroon and Croatia all lost their next game after playing in the heat and humidity of the Amazon rainforest capital of Manaus. The Americans, who allowed a 95th-minute goal in a 2-2 draw with Portugal on Sunday, may not be able to afford a loss when they play three-time champion Germany in their Group G finale Thursday with a berth in the knockout round on the line.

If they can advance, it would be the first time the U.S. has reached the next phase in consecutive World Cups.

“I don’t think it’s really bothering us right now,” midfielder Kyle Beckerman said Wednesday before his team’s final training for the match. “It’s the biggest game of all of our lives. Any fatigue in our legs will be erased. We don’t see the short rest as being a harm to us at all.”

Moments after the disappointing finish against Cristiano Ronaldo and Portugal, coach Jurgen Klinsmann pointed out how Germany had an extra day to prepare.

Klinsmann’s native country, which he led to the 1990 World Cup championship as a player and coached to the 2006 semifinals on home soil, played to a 2-2 draw with Ghana in Fortaleza on Saturday.

And there’s pressure on the second-ranked Germans. They’re a favorite to win the tournament and are trying to become the first European team to win a World Cup played in the Americas.

“We knew before the World Cup that conditions in South America are different and that it’s hot,” German midfielder Mesut Ozil said. “But we have prepared ourselves and saw when playing against Ghana in the second half that we were controlling the match. … If we consider the last two matches, we could say we have prepared ourselves very well. We were leading the first two matches. We were great against Portugal — 4-0, a deserved victory — but against Ghana we made a few mistakes, but it’s not that we weren’t fit. We can see that the team is in good condition.”

Whether Germany’s legs are fresher Thursday at Arena Pernambuco with one extra recovery day is to be determined. Rain very well could be a factor, too.

“I don’t think this is a disadvantage,” U.S. right back Fabian Johnson said. “We’ve tried everything to recover to prepare for this match. We’ve done everything to be at our top levels, in top physical condition.”

Regardless of any perceived disadvantage, the Americans understand they put themselves in this situation by not securing those three points that were oh so close against Portugal.

“It’s just been a non-issue,” U.S. midfielder Graham Zusi said. “I haven’t even really thought about it. It’s something that hasn’t come up.”