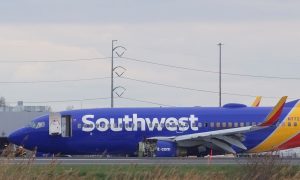 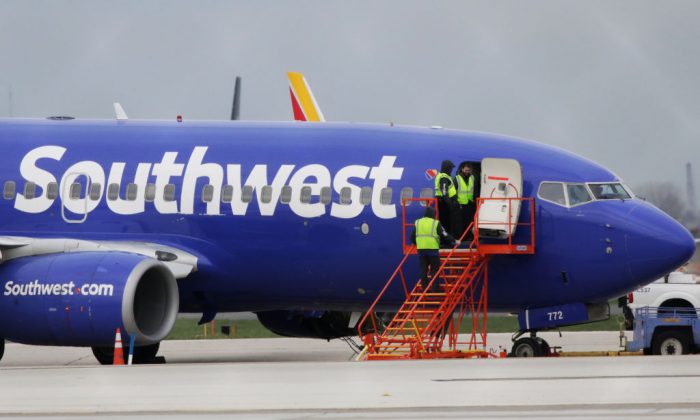 A Southwest Airlines jet sits on the runway at Philadelphia International Airport after it was forced to land with an engine failure, in Philadelphia, Pennsylvania, on April 17, 2018. (DominickReuter/AFP/Getty Images)
US News

FAA to Order Inspections of Jet Engines After Southwest Blast

The U.S. Federal Aviation Administration said it will order inspection of about 220 aircraft engines as investigators have found that a broken fan blade touched off an engine explosion this week on a Southwest flight, killing a passenger.

The regulator said late on Wednesday April 18, it plans to finalize the air-worthiness directive within the next two weeks. The order, which it initially proposed in August following an incident in 2016, will require ultrasonic inspection within the next six months of the fan blades on all CFM56-7B engines that have accrued a certain number of takeoffs.

Airlines said that because fan blades may have been repaired and moved to other engines, the order would affect far more than 220 of the CFM56-7Bs, which are made by a partnership of France’s Safran and General Electric.

The CFM56 engine on Southwest flight 1380 blew apart over Pennsylvania on Tuesday April 17, about 20 minutes after the Dallas-bound flight left New York’s LaGuardia Airport with 149 people on board. The explosion sent shrapnel ripping into the fuselage of the Boeing 737-700 plane and shattered a window.

Bank executive Jennifer Riordan, 43, was killed when she was partially pulled through a gaping hole next to her seat as the cabin suffered rapid decompression. Fellow passengers were able to pull her back inside but she died of her injuries.

On Wednesday, National Transportation Safety Board Chairman Robert Sumwalt said the incident began when one of the engine’s 24 fan blades snapped off from its hub. Investigators found that the blade had suffered metal fatigue at the point of the break.

Sumwalt said he could not yet say if the incident, the first deadly airline accident in the United States since 2009, pointed to a fleet-wide problem in the Boeing 737-700.

Southwest crews were inspecting similar engines the airline had in service, focusing on the 400 to 600 oldest of the CFM56 engines, according to a person with knowledge of the situation. It was the second time this kind of engine had failed on a Southwest jet in the past two years, prompting airlines around the world to step up inspections.

A NTSB inspection crew was also combing over the Boeing 737-700 for signs of what caused the engine to explode.

Sumwalt said the fan blade, after suffering metal fatigue where it attached to the engine hub, has a second fracture about halfway along its length. Pieces of the plane were found in rural Pennsylvania by investigators who tracked them on radar. The metal fatigue would not have been observable by looking at the engine from the outside, Sumwalt said.

Passengers described scenes of panic as a piece of shrapnel from the engine shattered a plane window, almost sucking Riordan out.

Videos posted on social media showed passengers grabbing for oxygen masks and screaming as the plane, piloted by Tammie Jo Shults, a former U.S. Navy fighter pilot, prepared for the descent into Philadelphia.

The airline expected to wrap up its inspection of the engines it was targeting in about 30 days.

The GE-Safran partnership that built the engine said it was sending about 40 technicians to help with Southwest’s inspections.

Pieces of the engine including its cowling—which covers its inner workings—were found about 60 miles (100 km) from Philadelphia airport, Sumwalt said. The investigation could take 12 to 15 months to complete.

In August 2016, a Southwest flight made a safe emergency landing in Pensacola, Florida, after a fan blade separated from the same type of engine and debris ripped a hole above the left wing. That incident prompted the FAA to propose last year that similar fan blades undergo ultrasonic inspections and be replaced if they failed.

By Alwyn Scott and Alana Wise