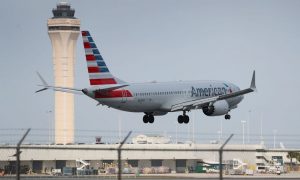 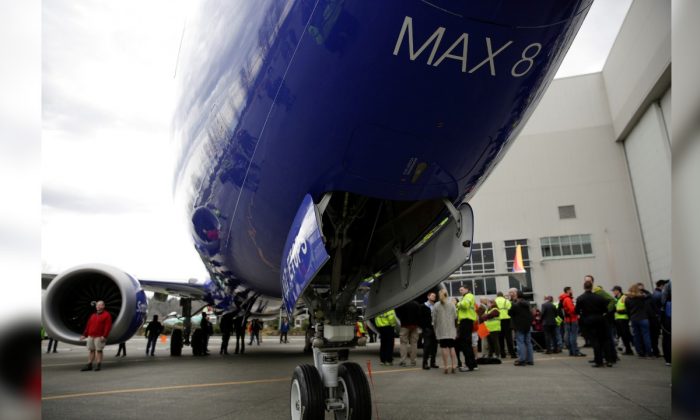 Boeing employees are pictured in front of a 737 MAX 8 produced for Southwest Airlines as Boeing celebrates the 10,000th 737 to come off the production line in Renton, Washington, on March 13, 2018. (Jason Redmond/Reuters)
Companies

With a crucial summit for the Boeing Co. 737 Max looming this week, regulators are downplaying the threat of a rupture to a decades-old working relationship between U.S. and European aviation authorities.
On the eve of a gathering of about 50 airworthiness experts in Montreal, the top European regulator, Patrick Ky, suggested that the Max could return to the air in the U.S. and Europe at almost the same time.

And officials privately have been discussing whether a critical disagreement over the jet’s architecture could be resolved after it resumes commercial flight, according to people familiar with the talks.

The Europeans singled out the plane’s angle of attack vanes earlier this month, saying Boeing hadn’t provided adequate detail to resolve concerns about the integrity of its design. The vanes, which measure the nose of the plane against the oncoming air stream, malfunctioned in two Max crashes that killed 346 people.

In an interview with a French publication, Ky said the flying public would benefit from “several independent but consistent opinions” on the Max’s safety. But he suggested that doing so wouldn’t leave the aircraft grounded in Europe long after airlines resume flights in the U.S.

“We are in permanent contact with the FAA in order to remain coordinated and to be able to aim for a near simultaneous return to flight of the aircraft in Europe and the United States,” Ky told Air and Cosmos International.

“We have different administrative processes, and this could generate a few days’ difference in the end,” he said. “A return to service under the same conditions and at the same time is an objective, not an obligation.”

The FAA hopes that any debate over design differences won’t hold up the return to service for the Max, the agency’s new chief, Steve Dickson, said last week. All Boeing jets are outfitted with two angle-of-attack sensors, while Airbus SE has at least three for its models.

While European regulators may insist on hardware or software changes to the plane, it could be possible to reach agreement to install them in the future, said one of the people familiar with the talks, who aren’t authorized to speak publicly since the matter is confidential.

Such an arrangement would only be approved if doing so was deemed to be safe, according to one of the people.

The summit will be a crucial first test for Dickson, a former airline pilot who was named the new FAA chief in August amid one of the biggest controversies the agency has ever faced.

As the FAA works to restore a reputation battered by suggestions of an overly close relationship with Boeing, it must also review the planemaker’s latest technical work and analysis of revamped flight control systems for the Max.

Tensions flared at a meeting last month, when a Boeing representative didn’t have specific technical information sought by the FAA and European regulators, according to people familiar with the interaction.

Ultimately, it will be the FAA and Dickson’s call as to whether safety concerns have been resolved and the Max can safely return to the skies. The pressure is immense for an aircraft at the center of a media maelstrom—and one of the largest U.S. exports as Boeing’s best-selling jetliner.

In a series of interviews last week, Dickson told media outlets that he hopes other regulators will follow the FAA’s lead on its the 737 Max reviews. He defended the FAA’s stature, even as many other countries opted to ground the 737 Max sooner than the U.S.

“I think the FAA has done more over the decades to promote global aviation safety than any other agency in the world,” Dickson said.

Ky roiled the aviation world by signaling during a Sept. 3 address that his agency didn’t intend to rely on the FAA, the lead agency for the U.S.-built Max. He also spelled out specific concerns with Boeing’s crew procedures and training and “integrity issues” with the angle-of-attack system. Erroneous readings from a single sensor triggered flight-control software that forced the plane’s nose down until pilots lost control in both crashes.

Boeing has redesigned the flight control system to compare inputs from both AOA sensors. If the sensors disagree by 5.5 degrees or more with the aircraft’s flaps retracted, the so-called MCAS system won’t activate and an indicator on the flight deck display will alert the pilots.

By requiring Boeing to add an additional sensor to its jets, or Max pilots to undergo full flight simulator training before climbing back into the cockpit, EASA would probably delay the jet’s return to Europe until mid-2020, said Kevin Michaels, managing director of AeroDynamic Advisory, an aerospace consultant.

“Probably one of these things will come through, in a worst-case, both,” Michaels said in an interview. Even if neither measure is enacted, “EASA is not going to come right after the FAA in my opinion and rubber stamp its finding.”

Following Ky’s comments before European Parliament, regulators in India and the United Arab Emirates also vowed to do their own reviews, fanning concerns of a splintered process that could bind future aircraft certification in red tape.

“Even if there’s any little remaining hope of joint recertification, the FAA still has to be extremely diligent and transparent,” said Richard Aboulafia, aerospace analyst with Teal Group. “At this point it’s less about the plane and more about preserving international air regulation reciprocity.”