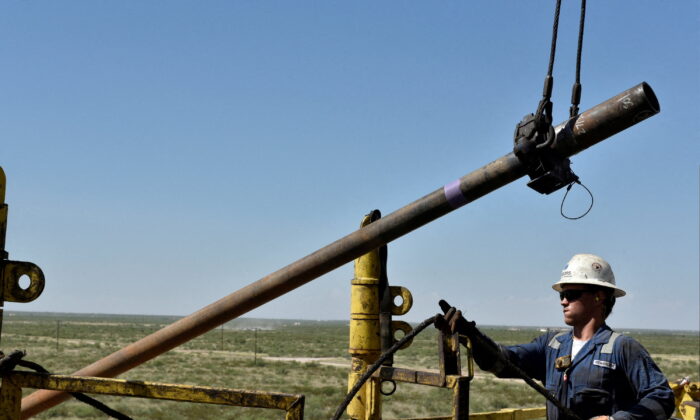 A drilling crew member raises drill pipe onto the drilling rig floor on an oil rig in the Permian Basin near Wink, Texas, on Aug. 22, 2018. (Nick Oxford/Reuters)
Markets

Activity in the oil and gas sector accelerated in the first quarter as company outlooks improved, according to a survey of oil executives released on Wednesday by the Federal Reserve Bank of Dallas.

U.S. crude will sell for an average of $93 a barrel by the end of the year and natural gas prices at the largest U.S. hub will average $4.57 per million British thermal units (mmBtu), according to the survey of oil executives from Texas, Louisiana, and New Mexico.

An index of activity by oil and gas companies in the region rose to 56 from 42.6 in the fourth quarter, marking the highest reading since the survey began six years ago, the survey said.

Still, executives lamented they are facing “unprecedented” supply chain and labor shortages that are affecting their ability to expand output and add employees despite sharply higher oil and gas prices.

Oil prices are at their highest level in over a decade after Russia’s Feb. 24 invasion of Ukraine and subsequent sanctions on its oil exports. Russia calls its military action a “special operation.”

Nearly all oilfield services companies surveyed said they were facing higher costs, and some said labor shortages are persisting. One said it had rigs available, but could not find workers.

“The supply-chain issues and shortage of materials are unprecedented,” one respondent said, adding, “We are also facing serious workforce issues because a meaningful portion of the labor force left the industry during the downturn and due to the vilification of the oil and gas industry.”

The average oil price needed to cover operating expenses for an existing well was $34 a barrel, respondents said, up roughly 10 percent from last year. The average price needed to profitably drill a new well was $56 a barrel, up about 8 percent from last year. More than 40 percent of respondents said oil prices will need to be between $80 and $99 a barrel to push publicly traded firms to significantly increase their production. Nearly 60 percent of those surveyed said pressure from shareholders to increase returns remains the primary driver behind public companies’ reluctance to expand output.

Still, some 15 percent of large firms surveyed said they planned to increase growth by more than 30 percent this year, while 23 percent of smaller firms anticipate that level of growth, the survey showed.

The survey, taken in mid-March, included 141 oil and gas firms, of which 91 were exploration and production companies and 50 were oilfield service firms.