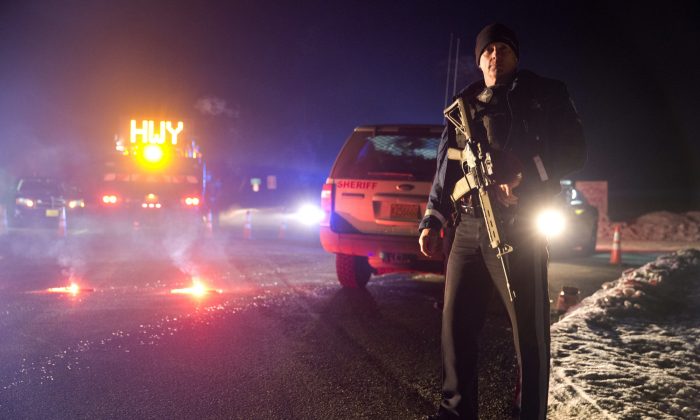 Sgt. Tom Hutchison stands in front of an Oregon State Police roadblock on Highway 395 on Tuesday, Jan. 26, 2016 between John Day and Burns, Ore. The FBI on Tuesday arrested the leaders of an armed group that has occupied a federal wildlife refuge in eastern Oregon for the past three weeks. (Dave Killen/The Oregonian via AP)
US

Eyewitnesses to the shooting of LaVoy Finicum say the Oregon militiaman was shot despite having his hands in the air.

Finicum, Ammon Bundy, Ryan Bundy, and several others were in a vehicle on their way to a nearby town when they were stopped about 20 miles north of Burns.

FBI and state police arrested the protesters and charged them with the felony offense of conspiracy to impede federal officers.

But during the arrest, authorities say Finicum and Ryan Bundy refused to follow orders–and shots were fired.

Finicum ended up dead, and Bundy was shot in the arm. It’s unclear if any law enforcement officers were shot.

Neither the police nor FBI has commented publicly on who shot first, but sources told The Oregonian that Finicum and Ryan Bundy “disobeyed orders to surrender and resisted arrest.”

However, several eyewitnesses, including Ammon Bundy, say that Finicum was trying to surrender when police gunned him down.

Bundy was sitting in the back of a police car when he saw his fellow rancher shot, he told his wife. He described what happened as “cold-blooded murder.”

“He had his hands in the air, and they shot him,” Bundy said, according to the Bundy Ranch.

Another eyewitness echoed Bundy, according to the Bundy Ranch.

Finicum’s daughter Thara Tenney took to Facebook soon after the death was reported, and said: “I want the world to know how my father was murdered today. His hands were in the air and he was shot in the face by the American authorities. Ammon Bundy reported there are 6 witnesses to this evil.”

I want the world to know how my father was murdered today. His hands were in the air and he was shot in the face by the American authorities. Ammon Bundy reported there are 6 witnesses to this evil.

A source told CNN that Finicum and Ryan Bundy did disobey orders to surrender, but acknowledged it’s unclear who fired first.

A representative from the Joint Information Command Center in Harney County said authorities had no comment on the claim that Finicum had his hands up.

On the other hand, protester Mark McConnell said in a video that Finician tried to get around a roadblock.

“When he exited the vehicle, the rear wheels were still spinning,” McConnell said. “He charged at law enforcement” and was shot.

Earlier this month, Finicum told CNN he didn’t want to die but would never go to prison.

“Look at the stars. There’s no way I’m going to sit in a concrete cell where I can’t see the stars and roll out my bedroll on the ground. That’s just not going to happen. I want to be able to get up in the morning and throw my saddle on my horse and go check on my cows. It’s OK. I’ve lived a good life. God’s been gracious to me.”

But another of Finicum’s daughters, Challice Finicum Finch, told NBC her dad wouldn’t have shot first.

“We all thought it would end, but not like this,” she said. “My dad did stress that they couldn’t pull a gun on them [officers] unless they pulled a gun. They were all committed to not firing on federal agents.”

Meanwhile, the remaining militia members at the Malheur National Wildlife Refuge have vowed to continue their occupation.

Five to six people had a meeting and by consensus decided to stay, reported Oregon Public Broadcasting.

“We’re not cowards like the rest,” one said, noting they’re prepared to die.

Jason Patrick, one of the remaining occupiers, told Reuters that they would stay until a “redress of grievances” was given.

Ammon Bundy and Members of Oregon Protest Arrested After Confrontation With FBI: Reports

He likened Finicum’s death to the killing of unarmed 12-year-old Tamir Rice in Cleveland in 2014. “The government can kill who they want for whatever reason they want with impunity,” Patrick said.

Meanwhile, on Operation Mutual Defense, a network of militias and patriot sympathizers, one of the occupiers issued a call for help at the refuge.

“You have an obligation to proceed to the Harney County Resource Center (the wildlife refuge) immediately,” wrote Gary Hunt. “If you fail to arrive, you will demonstrate by your own actions that your previous statements to defend life, liberty, and property were false.”