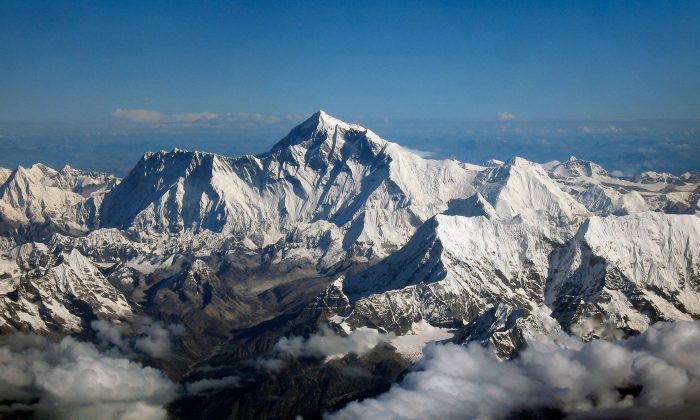 Eye-Witness: Death and Despair in the Aftermath of Everest’s Deadly Avalanche

It was day two of our 18 day trek to Everest’s Base Camp when in the afternoon our head guide Lhakpa Nurbu Sherpa sombrely reported to me that 16 Sherpas had been killed in an avalanche on the mountain. I was leading a group of university students as part of a course I teach in human-nature interactions in high alpine environments. The news confirmed what I had been suspecting since earlier in the day as a result of the unusual flurry of helicopters around the mountains.

While death and despair are common in the Everest region, this accident was especially tragic, as it is the largest number of lives ever to be claimed in one go on the mountain.

One of my students and I had been researching mountaineering deaths in the region, and had wondered how do locals and tourists view the grave sites along the route to Base Camp. But it never occurred to us that we would see the events unfold up close and personal, and that our research would take a different turn.

So, during the next 16 days of trekking, I started talking to local Sherpas about various lifestyles and livelihoods on Everest that put human lives at imminent risk. I started wondering how humanity would respond to the news from this faraway land. My first reaction was not so much about those who died but was about those the dead ones left behind – a fatherless child, a young widow, a god-fearing father, a grieving mother.

The other reaction I had was how news gets distorted in the media. CNN reported Sherpas revolting on Everest, a completely fictitious account of the very real events that were unfolding in front of our own eyes. There was also the pathetic initial response of the Nepalese government that it would provide compensation of just 40,000 Nepali Rupees (less than US$500) to each of the victims’ families.

Could all this have been avoided? Those who died were ferrying supplies between the two camps and the routes were becoming increasingly crowded so the porters had to slow down and got caught in the avalanche.

The scientist in me wanted to blame the unstable snow conditions – snow accumulation during last winter on Everest slopes were considered above normal – or the crowd of climbers that had gathered at the base of that unforgiving mountain. Still others, and this included many local Sherpas, thought the high altitude porters brought this upon themselves. Sherpas talked about how high altitude Sherpa porters are exploited by Western and local climbing companies.

A consistent theme in local interpretations for why this took place is that climbing Everest is no longer authentic. It’s become something people want to tick off their life’s “bucket list” – an endeavour of ego enhancement and greed of mostly Western climbers who often ignore basic rules of mountaineering safety for themselves and their support team.

Despite being crucial to the operation, Sherpa porters are on the lowest rung of mountaineers’ hierarchy, are often paid a pitiful salary (relative to the risk of dying), do not have adequate insurance coverage, and are treated by their own government with indifference.

Spiritual Side of the Mountain

And there is the spiritual side of explanation to these events. Our own guide Lhakpa and some of the Sherpa lodge owners whom I talked to thought that the young porters today are oblivious to the spiritual connections that elder Sherpas have had with the mountains – and the respect which accompanies it. Indeed, the Everest region is dotted with sacred mountains, landscapes, Buddhist monasteries, religious objects and spiritual symbols.

The younger generation of Sherpas are less concerned with the spiritual side of the mountain. The younger generation Sherpas (some of those who died were barely out of their teen years) are lured by “easy” money hoping to make a quick go at the mountain to never return to face its wrath next year. They are lured again once the money runs out, and the cycle continues.

The 17 of us were reminded again of the deadly impact the mountain can have. In Chukung, below the slopes of Mt. Lhotse, we witnessed the frantic search for a trekker from Slovakia who had vanished during his excursion to a nearby glacier (as of May 3 – the last day of our trek in the region – he was still missing). Or, the trekker from India who had died two days earlier in the lodge next to ours in Tengboche, waiting for a helicopter to rescue him as he had succumbed to acute mountain sickness. Similarly, a Chinese trekker had to be airlifted from Everest Base Camp, as he too experienced the same malady.

How many more deaths should the local community endure till they spring into action? The saga of death and despair on Mount Everest unfolds anew and seems to reach new proportions every year, as more and more people flock to the mountain. It’s time stricter limits were introduced to the mountain and safety of those conducting expeditions put above all else.

The Nepalese government, international climbers and guides, and the local Sherpas must work together to develop sound policies and action plans to address issues of risk, safety, adequate life insurance and financial compensation. Above all, they must ensure that the mountains are treated with respect and fear.

First things first, they should limit the number of climbing permits and make the mountain less accessible – not the other way around. Only by making the Everest climbing experience exclusive and targeted to climbing professionals, who’ve shown the mettle required to scale this deadly summit, can safety be improved and tragedies prevented.

Sanjay Nepal does not work for, consult to, own shares in or receive funding from any company or organisation that would benefit from this article, and has no relevant affiliations. This article was originally published on The Conversation. Read the original article.