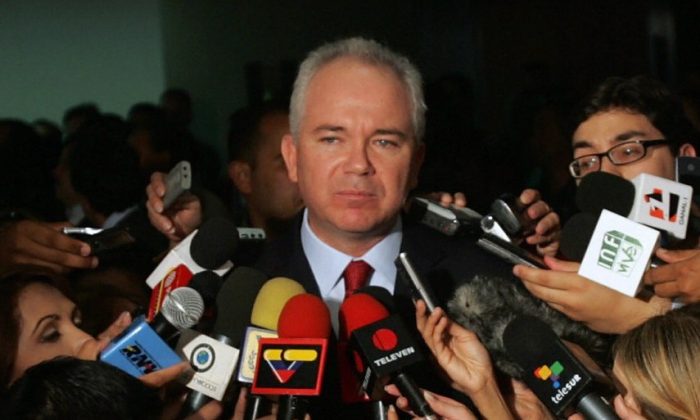 Venezuelan Minister of Energy and president of state-owned oil company PDVSA (Petroleos de Venezuela) Rafael Ramirez speaks during a press conference in Caracas in February 2008. Venezuela said on Monday that it would pay oil giant ExxonMobil $255 million for its 2007 nationalization of a joint venture project in the South American nation. (Pedro Rey/AFP/Getty Images)
Business & Markets

NEW YORK—Venezuela said on Monday that it would compensate oil giant ExxonMobil $255 million for its 2007 nationalization of a joint venture project in the South American nation.

An international arbitration organization—the International Chamber of Commerce—ruled that the South American country owes ExxonMobil in excess of $900 million. However, Venezuela—or its state-run PdSVA oil firm—will only pay $255 million due to existing debt.

The ruling figure of $908 million in compensation is less than 10 percent of the $10 billion the Dallas-based ExxonMobil sought. ExxonMobil argued that PdSVA breached its joint venture contract, while Venezuela said that taking over oil businesses within its own country is its sovereign right.

Venezuela, ruled by the socialist Hugo Chavez, has nationalized numerous oil enterprises from foreign and domestic private businesses. ExxonMobil, as well as other firms such as ConocoPhillips, have other pending arbitration cases, which have yet to be resolved.

Critics of Chavez’s policies have said that such a stance has hurt the nation’s competitiveness in foreign investments as firms have steered clear of the socialist nation. Venezuela has the biggest oil reserves in South America.