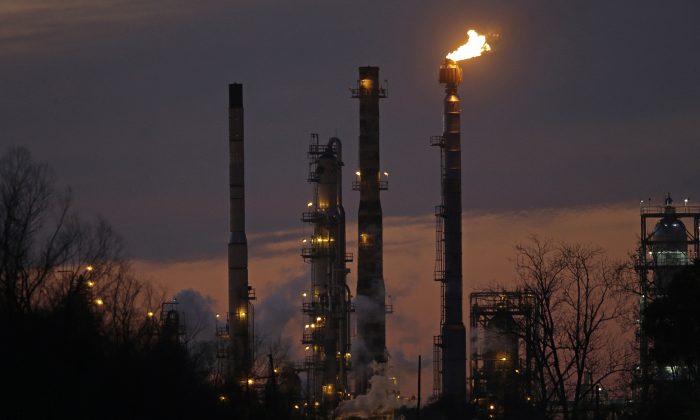 FILE - In this Feb. 13, 2015, file photo, stacks and burn-off from the Exxon Mobil refinery are seen at dusk in St. Bernard Parish, La. Corporate America has a profit problem. U.S company earnings are falling for the first time since 2009, when the economy was still reeling from the Great Recession. The main culprit is the plunging price of oil, which has decimated earnings at big energy companies like Exxon Mobil and Chevron. (AP Photo/Gerald Herbert, File)
Companies

The four companies—Rosneft, Exxon, Japan’s SODECO, and India’s ONGC Videsh—are partners in the Sakhalin-1 group of fields that will supply the gas, but Exxon and Rosneft had initially planned to build the LNG plant without the other consortium members.

As well as spreading the costs among more stakeholders, the broader involvement of the participants may mitigate sanctions risk.

Initially, Rosneft, and Exxon unveiled their joint plans to build an LNG production site in Russia’s Far East to President Vladimir Putin in 2013.

But production of the super-cooled, seaborne gas has so far failed to materialize for many reasons, including international sanctions against Moscow for its role in the Ukraine conflict.

LNG production itself is not subject to sanctions, but Russian companies have limited access to financial markets due to the restrictions. Exxon had to leave most of its other new joint projects with Rosneft due to the West’s punitive measures against Moscow.

Two sources—one person close to Exxon, and a high-ranking Rosneft executive not authorized to speak publicly—said both firms are committed to carrying out the LNG plant project within the framework of the Sakhalin-1 agreement.

Sakhalin-1, a hydrocarbon project, is led by Exxon with a 30 percent stake. Twenty percent belongs to Rosneft, with the rest split between SODECO (30 percent) and ONGC Videsh (20 percent).

“No one is interested in financing such a project alone,” the source close to Exxon said. Asked how the LNG plant deal would be structured, the senior Rosneft executive said: “It will be Sakhalin-1.”

The sources did not say how the financing of the LNG plant would be shared between the participants.

The source close to Exxon said a decision whether to go ahead with the LNG project was expected in 2019, otherwise, the project risked losing its market amid growing competition.

Currently, two LNG plants, Novatek’s Yamal LNG, and Gazprom’s Sakhalin-2, are producing the frozen gas in Russia, which has set an ambitious target of more than doubling its global LNG market share to 20 percent in the next decade.

Sakhalin-1 is pumping close to 300,000 barrels of crude oil per day, a record high, as well as natural gas that it has been unable to sell abroad. Gazprom has the exclusive rights to export pipeline gas from Russia.

Sakhalin-1 has to pump most of the gas back into the ground, while a small amount goes to local customers in the sparsely populated region. Decade-long talks with Gazprom and the consortium over gas sales have not yet yielded any results.

Rosneft, ONGC, and SODECO declined to comment. The Russian Energy Ministry and the government also declined to make any immediate comment.

“The Sakhalin-1 consortium continues to explore every opportunity to monetize Sakhalin-1 gas resources,” an ExxonMobil spokeswoman in Moscow said in emailed comments sent in response to Reuters questions.

Igor Sechin, Rosneft chief executive, said in June that the LNG plant would be built just across the Tatarsky strait in the port of De Kastri in Russia’s Khabarovsk region, where Rosneft already has an export terminal for Sakhalin-1 oil.

The source close to Exxon confirmed the technical plans for the plant and said the project partners are considering the option of laying a gas pipe along the existing oil pipeline from Sakhalin-1 to the LNG plant in De Kastri.