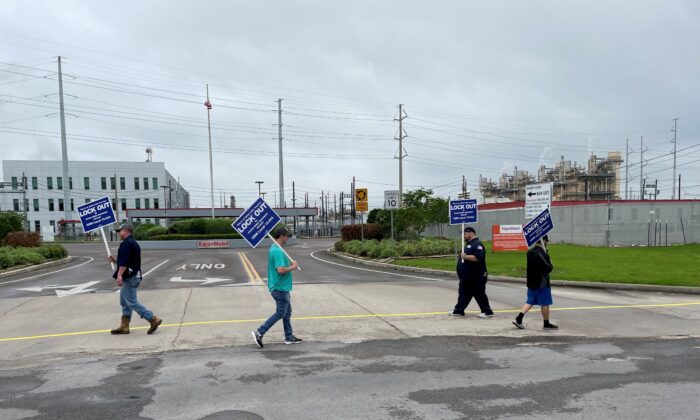 United Steelworkers union members picket outside the Exxon Mobil Beaumont, after being locked out of the plant by the company, in Beaumont, Texas on May 1, 2021. (Erwin Seba/Reuters)
Companies

Exxon Mobil Corp. said on Saturday it and the United Steelworkers union, the union representing workers locked out of a Texas refinery, discussed terms of a proposed labor contract.

Exxon said it provided clarifications to its latest proposal and rejected the union’s proposed changes to that offer, saying they would raise its costs.

“Union provided a one-pager with 24 proposed items they requested be included in our offer … the majority of the items increase cost to the Company, and as we told the Union, we are not interested in including them in our offer,” Exxon said.

It has been over five months since Exxon locked some 650 workers out at the Beaumont, Texas, plant, replacing them with temporary workers.

The new proposal came at a time when at least 30 percent of workers represented by United Steelworkers union local 13–243 signed a petition to the U.S. National Labor Relations Board to force a vote on removing the union.

The union on Friday accused the company of misleading people with confusing statements regarding the union, negotiations, and the company’s lockout.

Exxon also said the union refused to say whether it would seek a vote on the latest offer and the next bargaining meeting was not scheduled.