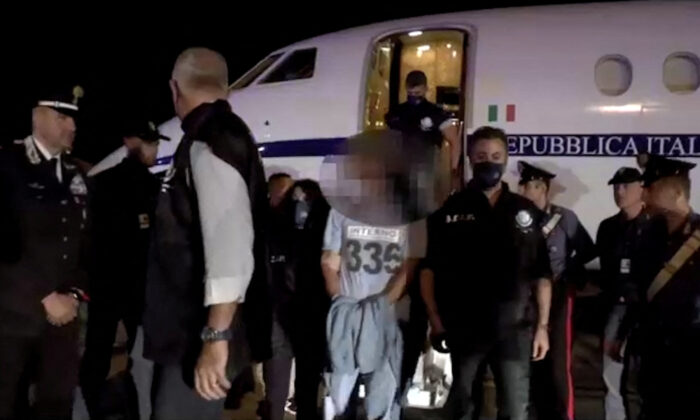 Rocco Morabito (pixellated), a fugitive drug lord with ties to the powerful 'Ndrangheta criminal gang, lands at Ciampino airport after being extradited from Brazil, in this screengrab taken from a video, near Rome, Italy, on July 6, 2022. (Carabinieri military police handout/Handout via Reuters)
Europe

ROME—Rocco Morabito, the second most-wanted fugitive in Italy and a bigwig in the powerful ‘Ndrangheta mafia, was flown to Rome on Wednesday after being extradited from Brazil ending some 28 years on the run.

Morabito, who was arrested in Brazil in May 2021, will now serve a 30-year prison sentence for various drug offenses.

“He was a major architect in the internationalisation of the (crime) gangs and became the king of cocaine brokers,” Nicola Morra, head of parliament’s anti-mafia commission, wrote on Facebook.

The interior ministry said Morabito had been included in its “special search programme” for absconded criminals. Italy’s number one fugitive is Matteo Messina Denaro, a boss of the Sicilian Cosa Nostra mafia who has been on the run since 1993.

Morabito, 56, had convictions for international drug trafficking from separate cases in the Italian cities of Milan, Palermo, and Reggio Calabria. Investigators say he was the point person for the ‘Ndrangheta in South America.

The ‘Ndrangheta is based in the southern region of Calabria, the toe of Italy’s boot, and has surpassed Cosa Nostra to become the most powerful mafia group in the country—and one of the largest crime gangs in the world.

Morabito was arrested, along with another fugitive drugs trafficker, in the Brazilian city of João Pessoa, some four years after he had managed to escape from jail in Uruguay.

He had been tracked down to Uruguay in 2017 and was living under an alias at the time, using a false Brazilian passport.

In recent years, Brazil has become a key player in the transatlantic drug trade, with its gangs tying up with Italian, Dutch, and Balkan players to move record loads of cocaine to Europe, lured by high prices and growing demand.