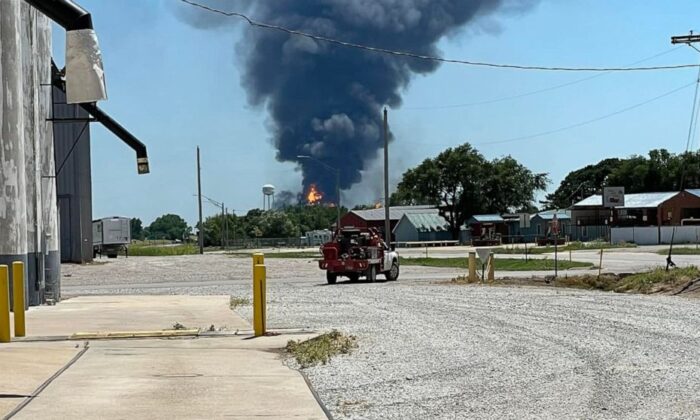 An aerial view of the explosion at an ONEOK plant in Medford, Oklahoma, on July 9, 2022. (Deer Creek Volunteer Fire Department/Facebook)
Crime and Incidents

Authorities responded to a significant fire at the ONEOK natural gas plant close to Medford, Oklahoma, after an explosion was reported over the weekend.

The Grant County Sheriff’s Office on Saturday called on anyone who lives within a two-mile radius of the plant to evacuate Saturday afternoon. It’s not clear for how long.

“Please avoid any travel into or through Medford on U.S. Highway 81 at this time,” the sheriff’s office wrote, adding that at the time, there was an “active incident” at the ONEOK plant.

The local Deer Creek Volunteer Fire Department said that people should avoid Highway 81 because of “a major fire” at the facility.

The cause of the fire is not known and an investigation is underway.

ONEOK’s operator released a statement that said it is not aware of any injuries at its Medford plant.

“Earlier today there was an incident at ONEOK’s Medford natural gas liquids fractionation facility. All ONEOK personnel are accounted for, and we are unaware of any injuries at this time,” the statement said. “We are cooperating with local emergency responders and appreciate their quick response. Our focus continues working with emergency responders to extinguish the fire and the safety of the surrounding community and our employees.”

Medford is located more than 100 miles north of Oklahoma City. The ONEOK facility is a natural gas liquids fractionation facility.

Days before that, an Energy Transfer natural gas transmission pipeline exploded, setting off a two-hour fire in a rural area on the west edge of Houston, according to state and local officials. The blaze was extinguished at about 12:10 p.m. CDT, according to the Texas Railroad Commission, which regulates oil and natural gas drilling and energy pipelines in the state. No injuries were reported from the explosion and fire.

Local firefighters sprayed water on nearby fields until the flow of natural gas was stopped, snuffing the fire.

Several weeks ago, a Freeport LNG plant exploded in southern Texas. Later, the operator said that the facility won’t be back online for several months.

“Completion of all necessary repairs and a return to full plant operations is not expected until late 2022,” Freeport LNG said in a statement in mid-June. The facility, located in Texas’s Quintana Island, suffered an explosion in early June.

There were no injuries or deaths reported, Freeport LNG said. Fire crews extinguished the fire about 40 minutes later. It’s also not clear what sparked the explosion and fire, and the company previously said an investigation is underway.