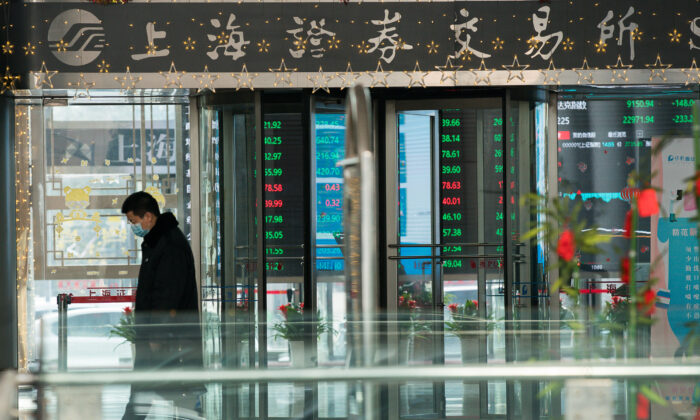 A security guard wears a mask when standing in front of the front gate of Shanghai Stock Exchange Building in Shanghai, on Feb. 3, 2020. (Yifan Ding/Getty Images)
China Business & Economy

China will soon launch a stock exchange in Beijing to serve small and medium-sized enterprises (SMEs), but analysts warn that this model has existed in China before and turned out to be a failure.

The Beijing Stock Exchange (BSE) was set up to serve innovative SMEs, Chinese leader Xi Jinping said in a speech at a global trade summit on Sept. 2.

The New Third Board was officially inaugurated on Jan. 16, 2013. It is China’s third national stock exchange after the SSE and the SZSE. It is also the country’s first stock exchange operated with a corporate system. The other stock exchanges are self-regulated legal entities under the supervision of the China Securities Regulatory Commission (CSRC).

The listing conditions on the BSE will be more lenient compared to other stock exchanges (for example, there is no compulsory regulation for company cash dividend ratios), which will help solve the difficulties in the real economy’s financing, especially for SMEs, a spokesperson for the NEEQ told The Epoch Times.

When asked about the timetable, the NEEQ spokesperson said it would be “very soon,” but it was not “convenient” to talk about it now. He confirmed that the address of the BSE will be the same as the NEEQ address, and that the innovative layer enterprises have already been set up—the BSE is the same entity as the NEEQ under a different name, he said.

When asked about the benefits of the BSE establishment, the NEEQ spokesperson said that institutional and individual investors would also participate in the investment to share the dividends from the growth of SMEs.

On Sept. 2, the NEEQ website released the statement: “The listed companies on the BSE are generated by innovative layer companies. [We will] maintain the basic layer and the innovative layer of the New Third Board and the BSE’s ‘progressive’ market structure. [We will] simultaneously pilot a registration system of securities issuance.”

The Nasdaq was established in 1971 for small companies that were too risky to be listed on the New York Stock Exchange in the early stages of its establishment. Mike Sun, a private investment consultant in North America, believes that the BSE has greater investment risks than the main board markets of Shanghai and Shenzhen, and that the previous implementation of the registration system has already failed.

“The [U.S.] Federal Reserve has repeatedly said it’s too early to raise interest rates because doing so would hurt the economic recovery [amid the pandemic]. The CCP [Chinese Communist Party] is taking advantage of the delay. It’s bracing for a devaluation of the yuan and capital flight. That’s why it’s eager to expand China’s financing platform,” Sun said.

At a press conference on Sept. 3, China Securities Regulatory Commission (CSRC) affirmed the establishment of the BSE as a good move and stated: “Small and medium-sized enterprises can do great things.  … The New Third Board is an important exploration of the capital market to serve small and medium-sized enterprises … the BSE should be established on the basis of the New Third Board’s select layer.”

In a video published on Sept. 4, Sober Observer, a Chinese financial YouTuber, commented on some of the economic issues behind the BSE launch. He said the top Communist Party officials believe that the U.S.-China decoupling will require China’s SMEs to prop up the domestic market. Thus, they want to guide capital investment into the real manufacturing industry of SMEs, using certain policies.

The establishment of the BSE reflects China’s current economic state—short on capital and weak domestic consumption, he said. The CCP wants to escape from the economic crisis, but whether it can make it is not certain. Furthermore, the establishment of the BSE to serve SMEs shows that the New Third Board, which has been run for so many years, has ended in failure, Sober Observer said.

Xuewen Ding, managing partner and general manager of Kymco Capital, a private equity investment firm, shares similar views. Ding told Radio Free Asia that the BSE is a platform established by the Chinese regime to connect SMEs in the manufacturing sector with capital. That was also the New Third Board’s slogan in the beginning. But it didn’t work, so all the top executives of the New Third Board resigned at that time.

Ding said that in the past, many people, including himself, suffered losses from investing in the New Third Board. Every company had to spend tens of millions of yuan to be listed, but all their money went down the drain. China’s SMEs, especially those in the manufacturing industry, are really in a very difficult and trying situation, he said.