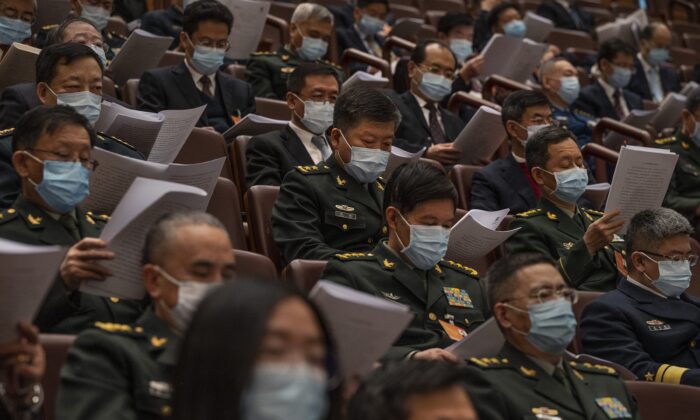 Attendees, many from the Chinese military, listen in the gallery at the opening session of the rubber-stamp legislature in Beijing, China, on March 5, 2022. (Kevin Frayer/Getty Images)
Analysis

The Chinese Communist Party (CCP) recently held its “two sessions” meetings in Beijing at which the regime sets its priorities. The CCP’s work report mentioned the so-called “general strategy” for a Taiwan policy. At the same time, Russia’s invasion of Ukraine has brought the situation across the Taiwan Strait renewed attention. Experts and scholars put forward different views and analyses on what the CCP will focus on.

CCP media reported that at the opening ceremony of the 5th session of the 13th National People’s Congress (NPC) on Mar. 5, Premier Li Keqiang’s government work report focused on cross-strait relations, claiming that “the Party’s overall strategy for solving the Taiwan issue in the new era should be carried out …”.

On Nov. 11, 2021, a resolution passed at the sixth plenary session of the 19th Central Committee of the CCP stated that CCP leader Xi Jinping had put forward a series of major policy ideas on how the regime will approach the unification of Taiwan, forming a so-called “general strategy.”

While the government work report of the rubber-stamp legislature talks about Taiwan issues every year, the above-mentioned reference in this year’s report is unprecedented in the 10 years since Xi took office, according to the Washington Post.

The report said that tougher wording was in line with the CCP’s recent impatience with Taiwan. In the past two years, the communist regime has stepped up military pressure on Taiwan, frequently sent military aircraft to intrude into the skies of Taiwan to conduct reconnaissance and demonstrations, and thereby kept the situation across the Taiwan Strait tense.

The ‘General Strategy’ for Taiwan Is Just New Words

Ding Shuh-Fan, professor emeritus of the Graduate Institute of East Asia Studies at National Chengchi University in Taiwan, told The Epoch Times that he believes the “general strategy” for Taiwan is just a change of words in this year’s work report. “Xi just found a new term for his era. We’re all waiting for the general strategy to come out,” he said. “The CCP is probably still working on it. Maybe it’ll come out at the 20th National Congress.”

Akio Yaita, director of the Taipei branch of the Japanese newspaper Sankei Shimbun, told The Epoch Times that in the past, the CCP had an “anti-secession law” for both sides of the Taiwan Strait.

“Perhaps after the 20th National Congress, that is, next year’s National People’s Congress, a ‘national unification law’ will be enacted, which is what they call turning passivity into initiative. But the two sessions this time obviously did not devote much attention to this aspect.”

In an interview with official media program Spotlight on Taiwan on Jan. 8, Sun Yafu, Vice President of the Association for Relations Across the Taiwan Strait said that cross-strait relations will undergo some changes in 2022, and that the 20th National Congress, to be held this year, will put forward “guiding ideas for the work on Taiwan in the next five years, make new decisions and deployments, and possibly put forward some new propositions.”

Li Cheng-Hsiu, a military expert and associate researcher at the National Policy Foundation of the Republic of China (Taiwan), told The Epoch Times that the resolution claims that Taiwan’s problems must be solved and cross-strait reunification achieved as soon as possible as the CCP gradually gains strength and influence. In his opinion, this is closely related to the so-called “great cause of rejuvenation of the Chinese nation” mentioned by Xi Jinping, and the goal of “general strategy” can be the guiding principle of the CCP’s policy toward Taiwan.

“But the so-called general strategy is only to reassure the mainland Chinese people that ‘our work on Taiwan has reached a certain level;’ it can boast that it has curbed ‘Taiwan independence;’ it can boast about the success of Xi’s work since he took office,” Li said.

“But they know what the actual effect will be, otherwise there would not be so much support for Tsai Ing-wen in Taiwan.”

Since Xi took office, Li reckons, the CCP’s definition of Taiwan’s independence has narrowed, pushing even moderate advocates inside Taiwan into opposition.

“We see that the CCP is becoming more and more assertive and brutal, contrary to the popular sentiment of Taiwan,” Li stressed. “It is clear that the CCP’s entire policy toward Taiwan, at least in terms of implementation, as a major mistake.”

In January, Zhou Zhihuai, the CCP’s so-called Taiwan expert and top think-tank member, also said that the upcoming 20th National Congress would establish a “unilateral” mechanism to solve the Taiwan problem at its own pace under the guidance of the “general strategy.”

In response to the so-called “unilateral,” Professor Ding Shuh-Fan analyzed that from a logical point of view, the CCP has given up hope to the Kuomintang and to the political parties in Taiwan. “That would be unilateral, of course.”

Li Cheng-Hsiu also said that the CCP’s assessment of Taiwan’s internal political situation and political development is that the DPP will remain in power. The old tone of expecting the government of the Republic of China and the people of Taiwan will slowly disappear, and the CCP’s own policy toward Taiwan will be unilaterally proposed.

“Xi’s new policy toward Taiwan will remain the basis for peace and unification in order to ensure that his term of office is extended at the 20th National Congress. After all, cross-strait relations are not the most pressing issue for the CCP now,” he said.

These experts and scholars agreed that the CCP would take into account the changing situation and outcome of the Russia-Ukraine war in any action it decides on.

After Russia invaded Ukraine on Feb. 24, the United States, the European Commission, Germany, France, Britain, Italy, and Canada decided to exclude some Russian banks from the SWIFT payment system. Since then, the sanctions have been increasingly intensified, with Japan and the Republic of China joining in.

Beijing has been avoiding making a clear statement about the nature of Russia’s “incursion” into Ukraine. Akio Yaita reasons that at present, the CCP is still in a hesitant stage, indecisive. The CCP is ostensibly neutral, but at home it is fully supportive of Russia. If Russia wins, Xi will have have firmer plans on how to handle Taiwan at the 20th Congress after gaining Russia’s experience in Ukraine. However, if Russia loses, the CCP will be humiliated internationally, and there will also be voices within the Party holding Xi accountable—something the anti-Xi forces are waiting for.

Li Cheng-Hsiu, on the other hand, believes that the Russia-Ukraine war should bring a great deal of inspiration to the CCP, both in terms of military use, deployment, and preparation for working with Taiwan, as well as in terms of the overall direction that will be more focused on promoting cross-strait integration and peaceful reunification than on military intimidation.

Could the CCP withstand a similar onslaught of sanctions as those imposed on Russia after it invaded Ukraine? “The CCP relies on the U.S. market and earns a huge trade surplus from the U.S. every year. It cannot afford sanctions,” Li said.