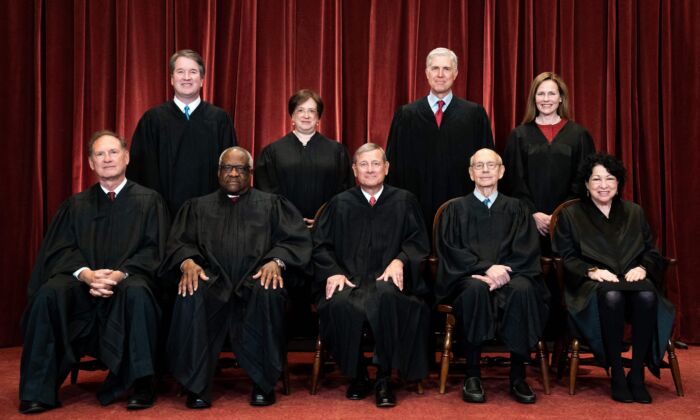 On Aug. 2, 2022, special counsel for the New York Legislature, Jeffery Wice, briefed National Council of State Legislators (NCSL) attendees on Merrill v. Milligan, a case before the Supreme Court that could upend state redistricting as soon as Oct. 2.

Wice said that in 2013, the Supreme Court struck down Section 5 of the Voting Rights Act (VRA), but left Section 2 in place.

That prohibits “vote dilution,” according to Wice, which “is the practice of dispersing minorities into many districts where they will make up an ineffective minority voting group.”

If a state practices vote dilution redistricting, voters can challenge the state as long as three factors are met.

First, it must be shown that a minority group consists of 50 percent of the voters in a specific district that was diluted.

Second, that the minority group votes cohesively and is like-minded in the type of candidates and laws it wants to be enacted.

And third—and most important according to Wice—it must be must shown racially polarized voting “where the white voters consistently defeat the minority voters preferred candidates of choice.”

Wice continued by stating that Alabama’s population is one-quarter black and that for decades, there was only one majority black district.

In November 2021, Alabama enacted congressional redistricting plans with on majority black district. Following the release of the new districts, three groups of plaintiffs filed suits against Secretary of State John Merrill, and the House and Senate redistricting chairman.

Specifically, the plaintiffs argued that the congressional maps violated Section 2 of the VRA because they concentrated black voters in the 7th Congressional District, and split up the remaining black voters into three separate districts.

The plaintiffs then asked the court to strike down the congressional maps and draw new districts with a second majority black district.

On Jan. 24,  a three-judge district court unanimously agreed that Alabama’s plan violated the plaintiff’s rights under Section 2 of the VRA, but Alabama appealed the ruling to the Supreme Court arguing that that map drawing process was “race-neutral,” and that there was no obligation to create an additional majority-minority district.

“Throughout the proceedings, one undisputed fact stood out. Millions of illustrative maps generated by some of the plaintiffs’ own experts-using algorithms programmed not to consider race, never resulted in a plan with two majority-minority black districts,” Wice reported of Alabama’s filing.

Alabama further argued that under the Equal Protection clause of the Constitution, “race-based redistricting is constitutionally suspect. Therefore, VRA cannot require the creation of an additional majority-minority district if the only way to get there is by prioritizing race over other traditional redistricting criteria.”

Plus, Alabama said that they were race-neutral when drawing the maps, and only by using race-based criteria would two minority districts be formed.

Thus, as there was no intent to dilute minority voting rights, Alabama didn’t violate the VRA.

On Feb. 2, the Supreme Court stayed the preliminary injunction granted by the three-judge panel and agreed to hear the case during its next term, which starts in October.

Wice concluded that after the court agreed to hear the case, voting rights groups expressed outrage, and accused the high court of trying to weaken the VRA further.

And, Wice said that if the Supreme Court agrees with Alabama’s interpretation of Section 2 of the VRA, future plaintiffs would have a more difficult time succeeding on vote dilution claims.

Wice concluded that the court’s decision on the future of redistricting, specifically regarding race, would address and possibly change how states practice redistricting in the future.